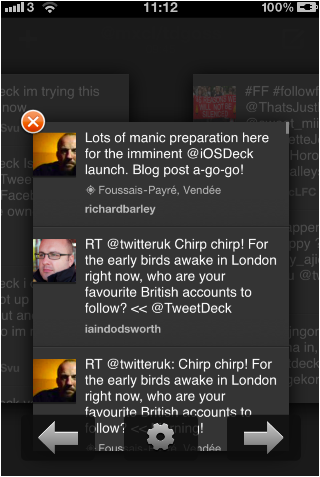 TweetDeck for iPhone users have a few new features and goodies to look forward to with version 2.0. It’s iOS 4 compatible, which means graphics will look clean and pretty on a retina display. It’s also much more customizable than before, and arranging your columns are a bit easier with pinch gestures, too. For better or worse, it will also support deck.ly so you can keep your posts under 140 characters, or extend them and have your followers click a link to see the rest of your tweet. Many Twitter users, such as myself, are either torn or against this feature, but sometimes that tweet about your cheeseburger and beer just can’t be contained in 140 characters.

iOS TweetDeck v2.0 has been built from the ground up to be stable and reliable, with frameworks in place to allow us to easily integrate new server-side processes like column sync as they are developed.

For a full list of features, see the link below. But if you’re more of a visual type, there is also a video tour of the new features included in TweetDeck 2.0 for iPhone. Enjoy!