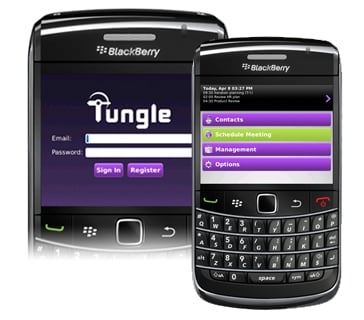 RIM has just added another company to the BlackBerry family: Tungle.me. These guys do a simple productivity app lets users offer a variety of meeting time slots that invitees can pick from on a web-based calendar. It looks like RIM is gearing to upgrade the functionality in their native productivity apps, seeing as not long ago they picked up Gist, which will likely end up becoming a part of the native contacts app. Like Gist, Tungle also pulls in information about meeting attendees from Facebook and LinkedIn – the two services actually already play nice together. It’s probably safe to assume their iPhone and work-in-progress Android apps will be axed in the process.

Here’s a video running down what Tungle does right now, but the most interesting stuff is at the end, where it talks about what the app could eventually do – like automatically set your schedule based on priorities, commitments, location, and preferences. For example, Tungle could eventually find a place close to your next meeting that sells your wife’s favourite perfume since her birthday is coming up. Turn-by-turn directions to get from one meeting to another generated with time of day and real-time traffic conditions in mind falls squarely in line with what RIM’s currently doing with their acquisition of Dash Navigation for crowdsourced traffic data.