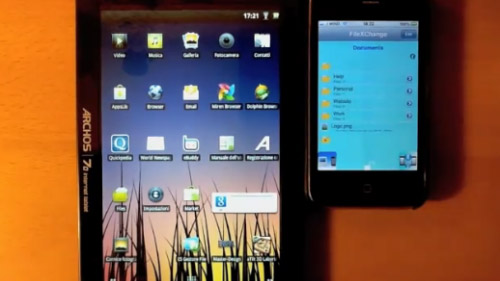 A company called iStartApp is working on a new app called FileXChange that will make file transfer between different platforms easy. You may be thinking that transferring files with Bluetooth already does the job, but that may not be good enough at least until the new specification of Bluetooth is widely adopted, allowing for faster speeds. In the meantime, FileXChange wants to fill this gap, enabling users to rely on Wi-Fi for moving large files from one device to the other.

It is said that pretty much any file type will be supported, whether it’s an image, document, video… you name it. You will either use Bluetooth or, to get some decent speeds, Wi-Fi to beam stuff between the devices. Speaking of devices, in addition to phones – tablets and computers can also “participate” in the exchange.

Finally, additional options will allow for password-protected file transfers, emailing files and so on. In a nutshell, we may be easily talking about an app that should come preloaded with every mobile device out there. What do you think?

Our readers from Germany will have to wait a bit longer to get their hands on the Samsung Galaxy S...