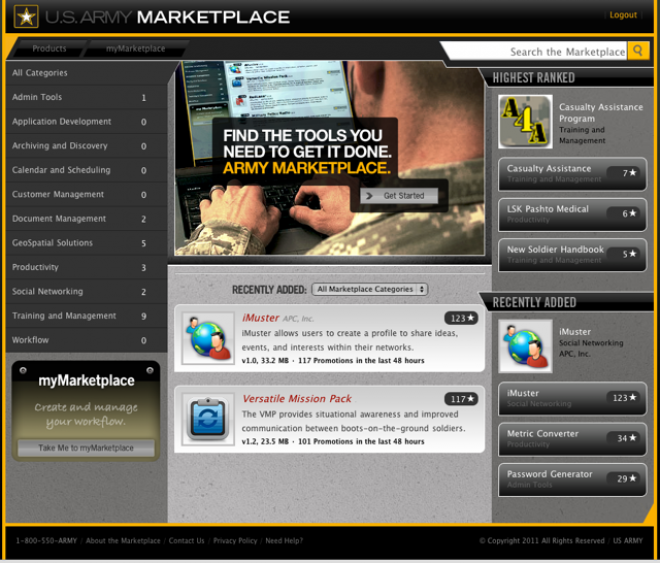 The Army is looking to get into the application business to help its own soldiers. We’ve seen custom apps before, but this time around, the Army is making an application marketplace for both computers and mobile devices.

The Marketplace will contain software that soldiers can download to their computer or mobile phone, but the existing selection is anything but full, with only 17 Android applications, and 16 for the iPhone. However, the Marketplace won’t just be a portal for applications, it will offer forums for those who are looking for a certain application that doesn’t exist yet. Once posted to the forum, those interested in developing the application would be contracted by the Army, and get the requested app out in the Marketplace as soon as possible.

“The current process of software creation [in the Army] is a very long and arduous process. That’s how we do things. But app development needs to be done quickly.” says Lt. Col. Gregory Motes, chief of the Army’s new Mobile Applications Branch. The quick turn around of these application will help other soldiers who require something similar, and help build a vast app count for the Marketplace quickly.

In addition to forums for soldiers, there will also be personalized user pages, allowing them to discuss application needs, and build ideas together for features they would like to see. These user pages will also show a panel of “Top Ideas” and “Top Projects”, so everyone will be aware of the go-to apps and ideas.

If all goes according to plan, the Army Marketplace will be revealed in August at the LandWarNet convention. Then again, anything could happen from here until August, delaying the Marketplace. For now, the site will be a good place to come up with ideas for applications rather than actually getting applications.

The Army is trying to get themselves in the mobile space in more ways than one, and an application market will likely be one of the strongest tools it could build for themselves.

The HTC Incredible 2 is coming to Verizon shortly, but us lucky bastards north of the border have been enjoying...