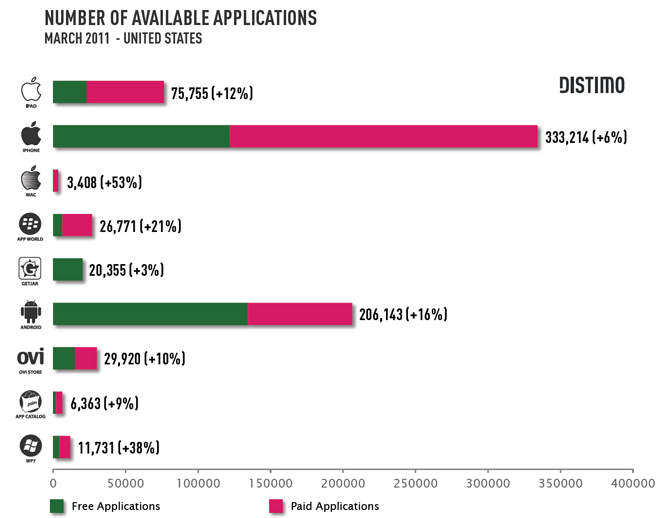 Distimo has launched their regular report on app store figures, running down the highest-ranked free and premium apps across iPhone, Android, BlackBerry, Ovi, GetJar, webOS, and Windows Phone app stores. In March, the Android Market offered more free apps than than the prestigious iPhone App Store, leading by about 12,500 apps in that category. Last summer, Android claimed a higher percentage of free apps, but now that Google has beaten Apple on an absolute basis, we can see why people aren’t as excited to pick up an iPhone these days. In fact, Distimo projects that within five months, Android will overtake iPhone as the top app provider in the world; that sounds a little soon to me, but given the momentum, it’s hard not to see it happen eventually.

Although Apple still has a respectable stable of tablet-optimized apps, Distimo has found that over half of the top 50 iPad publishers have already made tablet apps on other platforms. Speaking of the other players, Windows Phone is seeing good momentum and has blasted past the webOS market (in terms of selection, at least), while BlackBerry App World still wrestles with the Nokia Ovi store for the number three spot. GetJar, the biggest third-party app store out there, sits prominently between Windows Phone and BlackBerry.

Free apps are great and all, but they don’t always equate to quality; do you guys think a bigger number of free apps will be a real attraction to phone shoppers, or are the real quality apps made by developers who get paid well?