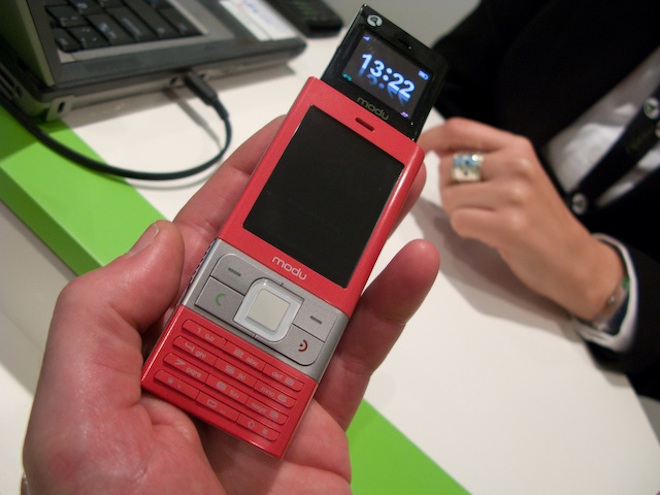 Remember Modu? The Israeli company that year after year showed off their concept of making a teeny tiny mobile phone that then docks into bulky cases that give said phone additional capabilities such as a QWERTY keyboard or high quality camera? We called them out on their bullshit many times in the past, and when they finally went out of business we broke out the sparkling wine in the office. Well apparently Google is now looking to buy their patent portfolio according to a report from Globes, an Israeli news publication. The cost? A surprisingly cheap $2 million. The patents in question? No clue, but there are over 100 of them. With Google also planning to acquire Nortel’s patents for roughly $900 million it looks like the search giant is starting to realize that if they want to play in the mobile industry they better have a large number of patents, or prepare to be sued by everyone, including Microsoft and Oracle.

It’s a shame that the current patent system is so broken that the only way to win the game is to patent everything you can think of during those 5 minutes you sit in silence on the can every morning. This has caused numerous companies to crop up who don’t actually produce anything, instead they opt to sue larger companies for violating their intellectual property. We’re not fans of patents at all, and think that the best implementation of an idea deserves to win, because an idea isn’t worth anything if you can’t make it work in the real world. Google’s history of using open source software to build amazing products and services shows that you don’t really need patents to change the world. Lawyers don’t really agree with that sentiment, but sadly we can’t kill them since there are laws against that.

ZTE has ambitious plans, to say the least. After reporting their mobile phone sales increased 51%, the Chinese company said...