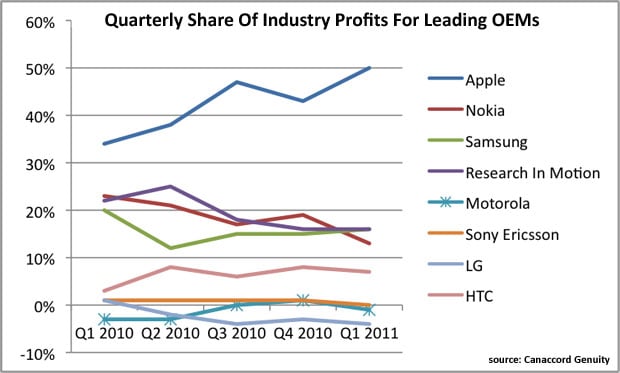 Last fall, we learned that Apple has completely decimated everyone in the smartphone industry in terms of value share. The iPhone maker commands a small percentage of the entire smartphone market, yet its earnings and value dominate all the other manufacturers combined. It’s really impressive, if you think about it, and the mounting pile of haters are really running out of ammunition against Apple’s massive pile of profits.

You know what I love to hear? Folks who say, “Just because everyone buys the iPhone doesn’t mean it’s actually any good.” As someone who spends an obscene amount of time with smartphones from every manufacturer on every platform year after year, I can say yes. It is. But it doesn’t really matter when you’re in the business of making money and Apple has 50% of the entire smartphone market’s profits. Although I wouldn’t blame anyone for being bored with the company’s consistent performance every single quarter where it always blows estimates and forecasts out of the water.

Yes, it really is remarkable that one phone – the iPhone – has made this sort of impact. It has shaped the smartphone industry’s direction since its release in June 2007. Suddenly the market was flooded with touchscreen devices – most of them at the time had those horrible resistive touchscreens – and look-a-like candybar form factor design.

But, you know, Android is available on a gazillion different phones with hundreds of different screen sizes and resolutions, and an innumerable set of hardware configurations. It is also available in a number of software versions with a plethora of user interfaces to choose from. Choice matters.

Is there an iPad competitor, or will Apple pull an ‘iPod’ and dominate?

There is no denying Apple's lead and command of the tablet market with the iPad and iPad 2. One could...