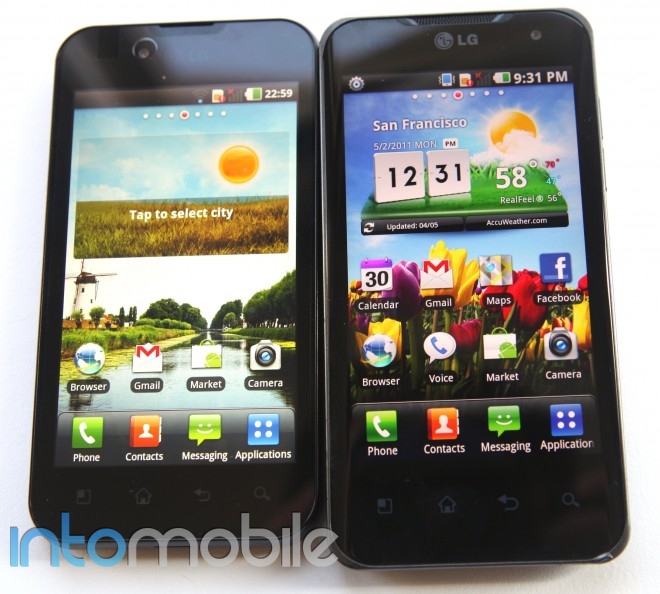 A nice delivery person just dropped off a package that came directly from Korea and we were ecstatic to see that it contained the sexy and slim LG Optimus Black. The company is claiming that it’s the thinnest and brightest phone out there and, as you can tell from the picture above, they’re not messing around.

The LG Optimus Black has what the company is calling a Nova display that can generate up to 700 Nits, which is a measure of Luminance. What’s more, the company is saying that the 4-inch Nova display is brighter but also conserves battery life beter than a standard LCD screen – you can get up to 50 percent more juice from the Nova display in an indoor setting.

At just 9.2 millimeters thick, the LG Optimus Black is quite a chic device and it feels really good in your hands. It’s not quite as angular as the T-Mobile G2x and I find that to be a good thing. Don’t get me wrong, the G2x and the Optimus 2X are good looking premium devices but the Optimus Black out styles it by a good measure.

That style comes with a trade off though, as you won’t get the dual-core NVIDIA Tegra 2 chipset that’s found in the G2x but instead you’ll get a 1 GHz OMAP3630. It runs Android 2.2 Froyo with the Optimus 2.0 UI but the company said it will soon have Gingerbread on it. There’s also a 5-megapixel camera with flash, 2-megapixel front-facing camera, WiFi, 3G (this one’s spec’d for the European markets, WiFi Direct, Bluetooth and all that you would expect from this type of device and a few surprises too.

On the left spine, there’s a “G” button to help you turn on gesture controls that are designed to help you control the LG Optimus Black with a single hand. For example, you can press and hold the G button, shake the phone twice and the camera will automatically launch when you’re at the launch screen. There are also gesture controls for answering phone calls, skipping music tracks and more.

We’re dying to give this a good working over and it came in an awesome box that I’ll have a video of soon. For now, enjoy the pictures and let us know what you think.

We've been playing with the super sexy Optimus Black for a little while now and we thought you'd like to...