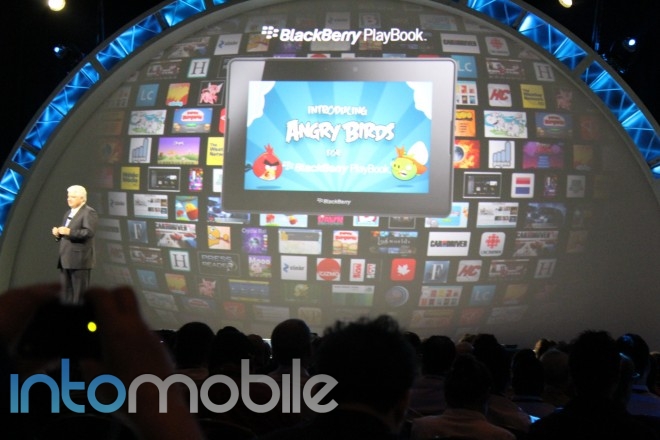 Which will come first? Angry Birds for PlayBook, or a native e-mail client for RIM’s lukewarm tablet? It’s hard to say, but if I had to guess, it’d be the beloved avian-versus-swine game. This morning during Mike Laziridis’ keynote speech at BlackBerry World in Orlando, Florida, it was announced that, in addition to the 3,000 tablet-optimized apps already available for the PlayBook (where on Earth are they?!), Angry Birds will be arriving to the platform.

It’s just the game that won’t quit. It has been downloaded approximately a bazillion times for iOS, Android and Symbian and has earned Rovio tons of cash, and it doesn’t seem to show any signs of serious slowing. And while it’s great that the PlayBook just might be 50% more fun to use with the addicting game in its portfolio, what about those other apps? When the PlayBook was reviewed by tech journalists, the resounding disappointment was its lack of apps and features that simply didn’t work – like the critical BlackBerry Bridge.

Perhaps it’s a little too easy to be jaded about all this, but could the coming of Angry Birds also signal the arrival of well-known and beloved apps? Are simple native clients on the way, too? Hopefully we’ll learn more as the week goes on.

Bing to be default search for BlackBerry

This morning at the BlackBerry World keynote in Orlando, Florida, attendees were a little surprised to see Microsoft's Steve Ballmer...