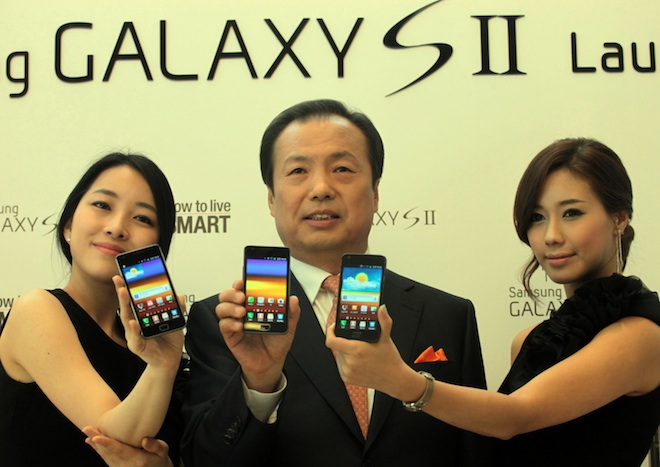 The Samsung Galaxy S II is going to be a hugely popular device because it’s one of the first Android smartphones to pack a dual core processor and because the previous Galaxy S sold over 10 million units in nearly every market in the world. Being that Samsung is a South Korean firm, their home country became the first market where the Galaxy S II became available and Samsung is reporting that between Monday and Friday of last week they received over 200,000 preorders for their latest flagship. This blows past the 110,000 preorders Apple’s iPhone 4 took when it launched last summer. The numbers don’t tell the complete story however. The Galaxy S II was available to preorder from three operators in South Korea, while the iPhone 4 was available from just 1. Anyway, Samsung is proud to point out that they hit 10,000 preorders in just 29 minutes and then doubled that to 20,000 preorders in 64 minutes. They expect to sell 10 million units of the Galaxy S II this year, which is the exact same number of Galaxy S units they sold in 2010. Why the lack of ambition?

Later this week AT&T and Samsung are going to hold a special announcement which we think will have something to do with the Galaxy S II hitting American shores. Combine that with the promised availability in 120 countries starting this month and we see that goal of 10 million being hit rather easily, but unlike the first Galaxy S which housed a 4 inch screen, this new one has a 4.3 inch screen, and that may actually be a turn off for lots of customers. Every year it seems that smartphones seem to get bigger displays, but make up for it by becoming thinner. At the IntoMobile offices we’re torn by this issue, with half of us wishing that the days of 3.7 and 3.5 inch screens would come back. The other half … they wear cargo shorts all year round.

Samsung and AT&T to host a special event on May 5th, possible Galaxy S II announcement?

Samsung and AT&T are getting together on Thursday the 5th of May for a "special announcement" that will feature "product...