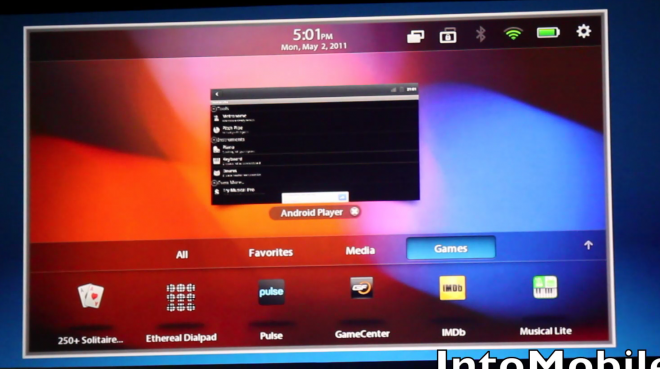 During this morning’s general keynote at the BlackBerry World conference, RIM showed off the Android app wrapper which was announced a few months ago for the PlayBook tablet. As you can see from the video below, a variety of apps all run extremely smoothly. Things started simply enough with a piano app and drum machine, but got significantly more impressive when they started trying out apps with rich graphics rendering. Pulse News also showed up briefly, which is something I’m really looking forward to on the PlayBook.

All of the usual Android menus and buttons are accessible through gestures and the contextual menu swiped down from the top. These apps for the PlayBook will need to be submitted separately to the BlackBerry App World, RIM’s official mobile software portal, but from what they were saying at the keynote, porting from one platform to the other is a breeze – RIM didn’t even need the source code to make the port for these apps.

While some might see it as a sign of concession when RIM starts allowing cross-platform apps, it’s a good way to kick-start an app marketplace which is just starting from scratch. The hope is that Android devs who submit their work to App World will eventually see enough return to make it worth their while to create something purpose-built for the PlayBook. Personally, I’m looking forward to the plethora of apps that will become available, and stunts any of my lingering interest in picking up a dedicated Android tablet.

The Android wrapper for the BlackBerry PlayBook should be made available this summer.

Although we've seen Sammy's Galaxy S WiFi 4.0 and 5.0 at the Mobile World Congress, the Korean company made them...