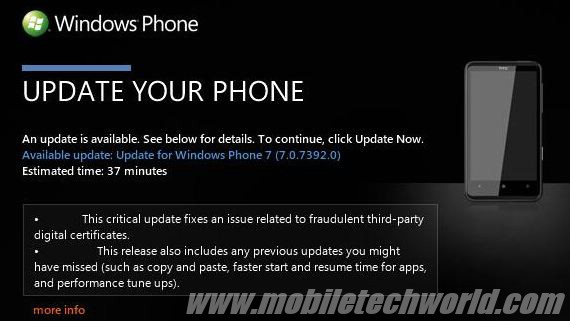 Forget about the NoDo update to Windows Phone that came out in February and enabled cut/copy/paste along with support for CDMA networks, and forget about the Mango update coming out later this year that will be eventually be called Windows Phone 7.5 and bring a new browser and multitasking, Microsoft is now honest to goodness issuing their very first security update for their new mobile platform. Bringing the OS up to version 7.0.7392.0, the update addresses the following:

We’re laughing at this of course because there are still Windows Phone owners who have yet to receive the NoDo update, and because the phrase “Windows Updates” just puts a smile on any Mac user’s face. To be fair however, the latest version of iOS has been updated quite frequently due to various bugs, and it’s expected to receive another upgrade by the end of this month to tackle a location tracking issue that’s stirred up quite a bit of controversy and even a hilarious episode of “South Park”.

We’ll be keeping an eye out to see how many people are going to receive this upgrade and what Microsoft will do in the future to make sure that updates get pushed out as smoothly as possible and with little to no interference from operators.

Sprint getting its own version of the Trophy – HTC Mazaa?

It seems the HTC Arrive just isn't enough for Sprint. They want another Windows Phone 7 device in their portfolio...