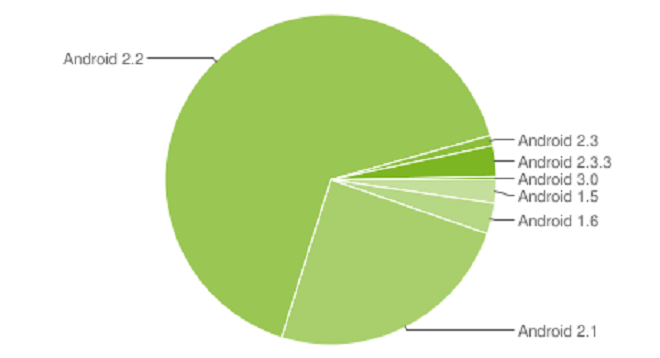 We’ve been raving about Android 2.3 Gingerbread for months now but chances are you haven’t had a chance to play with it yet. According to Google’s monthly Android stats, only 4 percent of Android users are on the Gingerbread version of the platform. That’s sad.

Android 2.3 Gingerbread launched nearly five months ago on the Samsung Nexus S and it brought an improved keyboard, better web performance and an overall boost in across-the-board performances. Still, only 3 percent of users are on Android 2.3.3 while 1 percent are on 2.3.

The vast majority of uses are using Froyo, as 65.9 percent of consumers are on Android 2.2. The Froyo platform is still highly capable but it’s disappointing to see the lack of updates. Eclair, or 2.1, accounts for 24.5 percent, while 5.3 percent are still on Doughnut or lower.

Even worse, only 0.3 percent of users are on the Android Honeycomb platform, which doesn’t portend well for the Motorola Xoom sales. Still, we should see a variety of Honeycomb tablets in the near future, so expect that number to rise rapidly.

Who should we be blaming? Well, every party has a role to play. Handset makers like Samsung and HTC insist on putting its own customized UI layer on top and this takes time to work with new versions. For an over-the-air update, the software must go through various testing and this also holds up the process.

Google could be more open with its partners too, as I’ve heard from multiple companies which don’t get a look at what the next version will look like until the SDK is released. Heck, even end users could be making this happen if they raise a big enough stink.

With a new version already coming (learn how to manually install it here) and potentially more goodies at next week’s I/O conference, expect this issue to get worse. Sigh.

The 7digital Android app is trying to make a bigger dent in the mobile music market by updating the app...