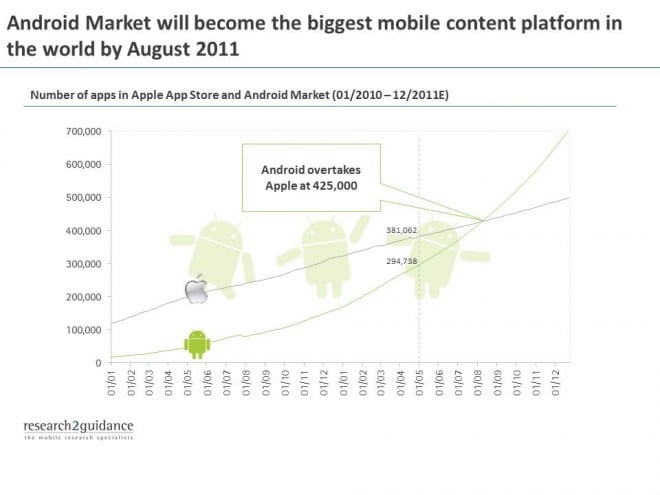 Since the launch of the iTunes App Store by Apple in 2008, not another app market has come close to touching the iOS store until now. Or at least that’s the presumption. Apparently, the Android Market is coming close, and may even surpass the sheer number of available apps in Apple’s App Store. The rate at which the Android Market might set it to surpass Apple by August 2011.

Of course, this still doesn’t change Apple’s dominance in the app market by revenue. As we learned yesterday, the Cupertino-based giant is poised to take 76% of total profits in the app market space by the end of the year.

Google’s Android Market is the fastest growing app store today. Currently it shows growth rates more than twice as high as Apple’s App Store. In April Android added 28,000 new apps, whereas Apple lagged behind with only 11,000 apps. Each market leaders adds more apps to their store every month than other platforms have in total.

Good to know all those wallpaper apps, plug-ins, extensions, language packs and ringtone makers are going to put a dent into Apple’s bottom line. Kidding aside, sort of, it’s good to see this growth because it’s also good news for developers. Android is being taken far more seriously now than ever as a viable platform on which to earn a living as a developer, but it’s also becoming increasingly difficult to get noticed as the market gets flooded.

Here’s what the study suggests for those devs:

– Go niche category: Don’t submit your app to a category with hundreds of new adds per week

– Use niche promotion: Make use of specialized Android sub market places which allow direct sponsoring possibilities within the store

– Go niche independent stores: Make use of independent app stores to increased reach and to place your app in a less numerically competitive environment

– Localize: Concentrate on a specific country with the service the app is offering

– Be the first to know: Changes in the market will create new opportunities for those who are aware of them, and can make the most of them before competition jumps on the bandwagon.

It’s a bit rough, and perhaps some developers may need a slight change in direction, but with Android’s continuing growth both in terms of market share and app market size, it’d be worth it.

The super thin, sexy, and powerful Samsung Galaxy S 2 just hit up the FCC, bringing some interesting news with...