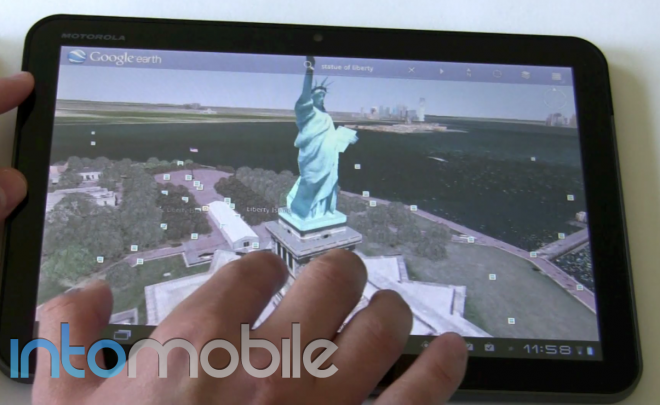 Google Earth has been a joy to use on the iPad but the search giant has finally optimized the app for its own Android Honeycomb tablets. As you can see from the video below, it’s quite a sight to behold.

The Google Earth Honeycomb app really feels like a desktop experience, particularly with the power of the dual-core NVIDIA chip in the Motorola Xoom. The ability to use multitouch actually takes it up a notch from viewing it on a computer.

The Google Earth Honeycomb app has been optimized for the larger tablet screen. That means you get little popups for the different layers. You can include things like businesses, roads and more.

A neat aspect of the Google Earth Honeycomb app is the ability to view 3D buildings. Similar to the 3D buildings in the Google Maps app, this just gives you a better sense of the scale of locations you’re looking at.

The navigation is silky smooth too, as you can use pinch-to-zoom functionality to get a closer look at things, use two fingers to pan up and down, as well as left and right. Basically, this has all the functionality you’d expect from a tablet app and it definitely packs the “wow factor” that has been lacking from many Android tablet apps.

Hopefully, we won’t just see good tablet programs from Google, as we’re about to see a lot of Honeycomb tablets hit the market and users are going to want cool, optimized apps to play with. The catalog of programs is one of the big reasons the Apple iPad 2 is a major success and Google won’t be able to curb that unless developers get behind Honeycomb in a big way.

The Google Earth Honeycomb app is available now and it’s free. You can download the program from the Android Market here. Remember, you can push it to your tablet directly from the browser.

We were digging the Taptu iPad app a few weeks ago because the news reader with a social twist had...