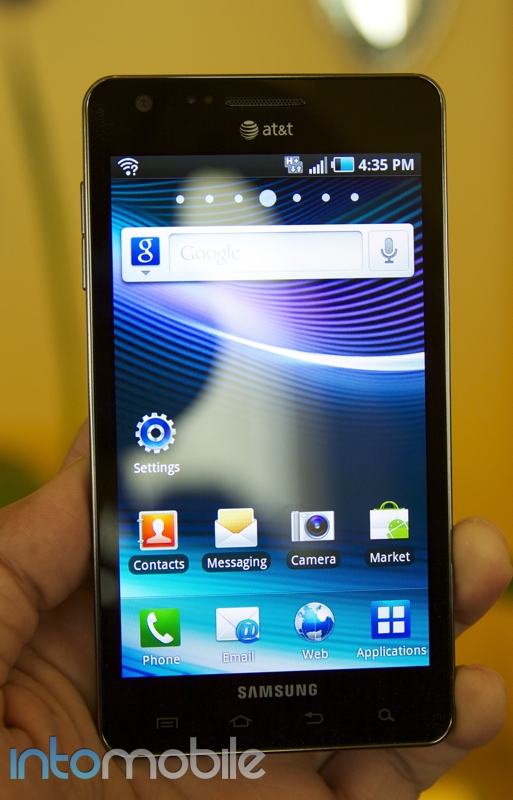 We’re here in NYC at the Samsung and AT&T event and we’ve got a nice first-look at the new Infuse 4G. It’s an Android Froyo device, that’s 2.2.1 for those of you half asleep out there, and it is a beast. The device was touted as the most powerful and the fastest device that AT&T has to offer. It’s also incredibly thin at just 8.99 millimeters, which makes it thinner than the anorexic iPhone 4. Putting your phone into your skinny jeans pockets won’t be an issue anymore.

Despite its thin size, it still packs a lot of power. The device is rocking a 1.2GHz processor and sports a 4.5-inch Super AMOLED Plus screen, which is better than the Super AMOLED displays found on the Galaxy S series devices — it’s got that extra “Plus” in there, which means it has 50% more subpixels for better contrast.

For entertainment, it comes with a special edition version of Angry Birds – yep, can’t get away from that game – with a special golden egg level that allows you to earn achievements to win prizes, exclusive to Infuse 4G users. Additionally, you can snap high-resolution photos and record HD video with the 8-megapixel camera on back, and take self-portraits or do video calls with the front-facing camera.

The Infuse 4G, with our very limited time with the device here in New York, was pretty snappy. Swiping through the screens didn’t cause any problems and there was no noticeable lag, and the screen was impressively bright and vivid. The contrast was nice, even in an extremely well-lit room (it’s sunny in NYC for once).

In the hand, the Infuse 4G feels pretty good despite its size. I do have rather large hands, so it might be a bit cumbersome for those with smaller hands, but the 4.5-inch screen was pretty easy to navigate – much easier than, say, the Droid X which I find painfully long for the thumbs. It’s also very lightweight, which is nice, and a bit expected given how thin it is. Because it was tethered to the display, I really couldn’t get a good feel for its thinness, but it certainly didn’t seem bulky when I was fondling it for impressions and photos.

Overall, the device feels nice and it’s going to be thoroughly familiar to those who have owned the Galaxy S series devices, or Android devices with Samsung’s TouchWiz UI. We do have a review unit in tow, so expect a full and detailed review soon along with some video walkthroughs!