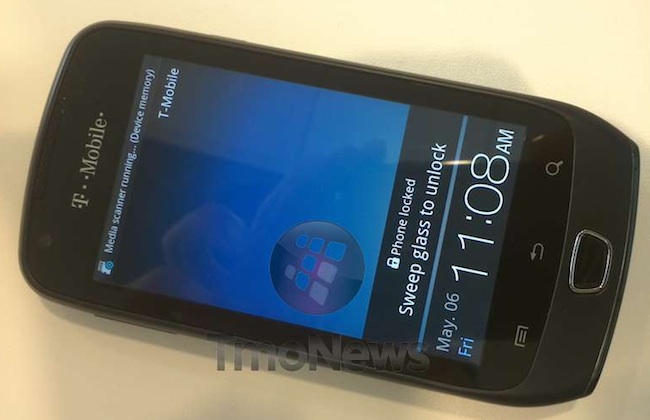 According to images leaked to TmoNews, it looks like T-Mobile is soon going to announce a device called the “Exhibit 4G”. It runs Android 2.3.3, which used to be the latest version until less than 2 weeks ago when 2.3.4 came out and brought with it support for video chat, has a 1.4 GHz processor that for some strange reason the tipster who supplied the image above says runs on the old ARM11 architecture, a 5 megapixel camera with 720p video recording, and a front facing VGA camera. As for the screen, it measures just 3.7 inches across, something we haven’t seen since the Nexus One shipped in the winter of 2011, and it has your typical 800 x 480 pixel resolution. We don’t know whether this puppy is going to support 21 Mbps HSPA+ or 14.4 Mbps HSPA, but we’ll find out in due time. We’re equally stumped as to the cost, but judging by the design alone, and the smaller than average screen, we’re betting that this is going to be an exceptionally average midrange device.

We’d rather see T-Mobile scoring the Galaxy S II and offering it to their customers, partly because in Q1 T-Mobile lost subscribers, and partly because if AT&T got the S II they would slaughter it with additional software and their network wouldn’t be able to fully feed the 21 Mbps HSPA+ radio inside, but back to the “Exhibit 4G”, it shows how quickly manufactures are getting around to launching devices with the latest software from Google onboard. Android 2.3.3 came out in early February, and here we are exactly 3 months later with leaked images of a device that’s running it. HTC and Sony Ericsson take note.

With Google I/O kicking off tomorrow, we don’t know what to say about this device, or any Android device for that matter, because we could see something earth shattering be announced or we can fall asleep in our chairs.