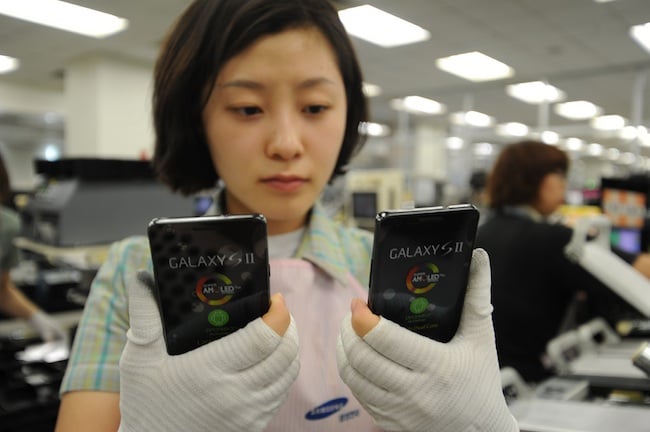 Samsung’s Galaxy S II, announced back in February at Mobile World Congress in Barcelona, has been out for less than a month, yet it’s already logged 3 million sales according to a recent report from Samsung Hub. The 4.3 inch Super AMOLED Plus packing, dual core rocking, Android 2.3 running superphone has seen many favorable reviews from technology publications all around the internet, so it goes without saying that these sorts of preorder numbers come as no surprise. Now while the 3 million figure isn’t exactly equivalent to customer sales, they instead reflect operators securing stock that they then resell to customers, the equivalent of American operators buying phones from Samsung and then selling them to you, effectively taking their cut, it’s still an impressive milestone. The South Korean handset vendor has said that they plan to sell 10 million of these things, and we think they’ll likely hit that target before the end of the year.

The only things that can possibly derail the success of the Galaxy S II is Google announcing a much improved version of Android at Google I/O tomorrow, making technology savvy buyers hold off on making a smartphone purchase. Then there’s also devices like the Sony Xperia Mini and Palm Veer that are starting a trend against the anti-giant display, will others jump on the bandwagon? And finally there’s Apple, who in less than a month will show off iOS 5, and quite possibly unveil their long rumored cheaper iPhone.

If you’re one of the people who like Android, but are deciding to hold off on the Galaxy S II, we’d like to know why you’ve come to that decision. Is the high price tag turning you off, or are you waiting to see something with a higher screen resolution, or a smaller screen, or … well dammit, what’s the reason?

Skyhook, the company behind the technology that makes GPS navigation more precise, announced a deal with AOL-owned MapQuest to embed...