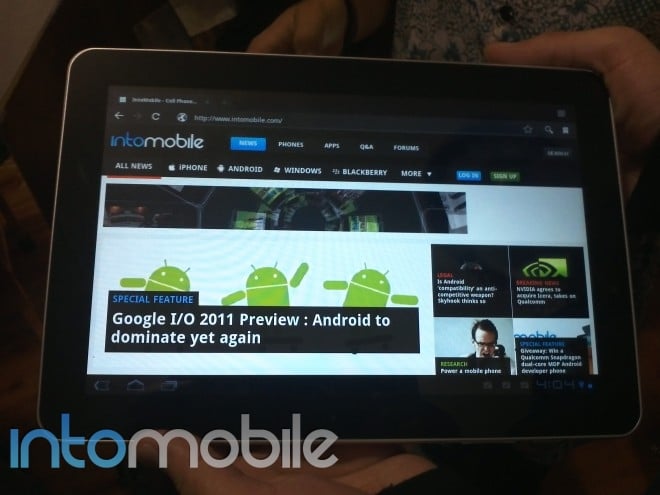 It’s Google I/O week, so you know we’re going to have some cool Android news. The Samsung Galaxy Tab 10.1 with the TouchWiz UX will be landing as a WiFi-only version June 8. We’ll have to see when the carriers pick it up.

It’s interesting that the company will be taking a direct-to-consumer approach with the Samsung Galaxy Tab 10.1, as the previous model launched on all four major carriers. The problem with this approach is that it also meant consumers had to sign on for a long-term data plan in most cases and it’s unclear if that model is going to work with tablets.

While there were reports that the company went back to the drawing board after the iPad 2 was introduced, I can tell you that the production models of the Galaxy Tab 10.1 are incredible. These are amazingly light and thin and just feel really good when you hold one. We looked at earlier versions but this was the first time we’ve seen a retail model running Android 3.0 Honeycomb in the thinner frame.

The versions of the Samsung Galaxy Tab 10.1 we saw didn’t run the customized TouchWiz UX, so it will be fun to see how this custom skin augments Honeycomb. When we looked at it at Mobile World Congress, we were impressed that it added functionality to the tablet form of Android without detracting from the functionality. It may be a consideration if it slows down the updates to future versions. though.

Smartly, we’re hearing that the Galaxy Tab 10.1 WiFi will probably land for about $399 before taxes. This is a great way to counter the juggernaut that is the Apple iPad 2 and I can tell you that this device seems like every bit the equal of the Apple tablet.

Check out our hands-on coverage with the Samsung Galaxy Tab 10.1 from Mobile World Congress and the photos we snagged of the thin and sexy production model.

If Pinball HD wasn't enough for you, then you may be excited to hear that another pinball game is on...