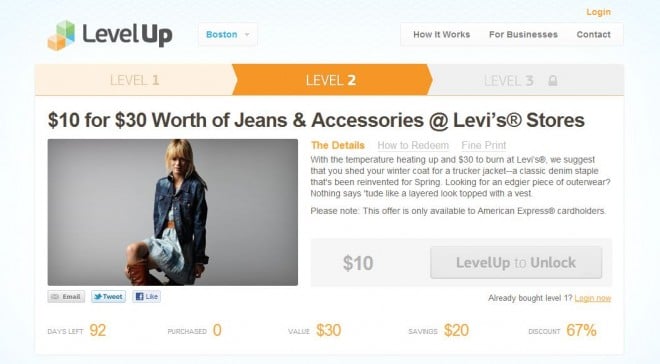 If you’re like me, you’re kind of a cheapskate and have been amazed by the wave of Groupon-like services that have sprouted up but the redemption process can still be kind of a pain. The team at SCVNGR has teamed up with American Express to deliver a solution which may solve that problem.

You’ll be able to link your American Express credit card with your SCVNGR LevelUp account in order to redeem these location-based digital offers. The LevelUp platform is SCVNGR’s take on the daily deal craze but it adds multiple elements which may make it more valuable to consumers and businesses. For example, there’s a three-level game mechanic where the user continues to get better offers (or go up levels) the more times they utilize this service. The first deal could be for $10 off but returning for the second level could get the user even more of a discount or loyalty reward.

The process is simple: You hook up your American Express card with the platform, the deal is then sent to your card and you can use your card at the location in order to pay for the deal and receive the discount without having to print out a sheet of paper or show your discount code via a mobile app. Your iPhone or Android phone will get a push-notification when the transaction is completed.

For merchants, the SCVNGR, American Express deal could be beneficial because it could lead to simplicities in training. Instead of teaching each worker how to take the coupon or read off a mobile app, they just have to swipe the credit card like they normally would and the discount will be applied without much fuss.

The SCVNGR LevelUp platform is only widely available in Boston and Philadelphia and the American Express deal will be rolling out in a pilot program in San Francisco for the next week select Levis stores. I’ll check it out in the next few days and tell you how it works out.

Google Goggles, the neat image recognition and search application for Android, has been updated to version 1.4 with a couple...