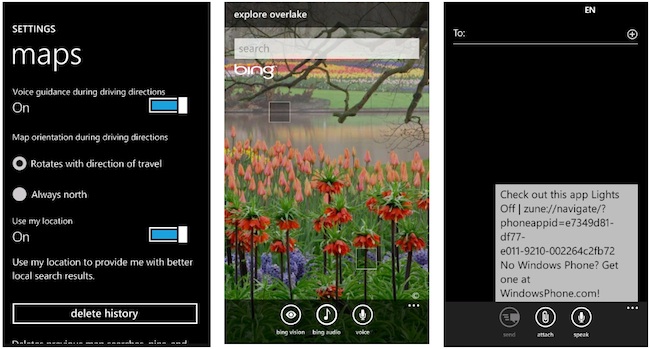 The first Windows Phone devices shipped in October/November 2010 and since then we’ve only seen one update issued for the platform that brought copy and paste support, along with the ability to use CDMA networks. The update itself didn’t exactly go as planned, with several users finding themselves with an expensive paperweight at the end of the update process. Later this year the first major update, codename Mango, but will likely be rebranded to Windows Phone 7.5, will come out and while we knew several of the new features it would bring with it, such as a new browser based on the same code as Internet Explorer 9, third party multitasking, and better support for sensors, we didn’t have the complete picture. In a recent episode of the Windows Phone Developer Podcast, whether done intentionally or by accident, we don’t know, a few more details about Mango were unveiled.

First, the big one, turn by turn navigation is coming to Windows Phone. With Microsoft and Nokia making their marriage official now, we’re not really surprised about this since Ovi Maps has had this feature for a while. After Mango comes out, the only platform to not have turn by turn navigation built in will be Apple’s iOS. Next there’s speech to text, something that’s sadly only being built in for the SMS application. Android users know how convenient it is to have the ability to use speech for inputing text in nearly every text field in the OS and in third party apps. Then there’s a clone of Google Goggles, dubbed “Bing Vision”, that will let you take a picture of a bar code, poster, book, CD/DVD, and make a query using the Bing search engine.

And one more thing … for all you people who love Shazam, Microsoft is cloning that too and calling it “Bing Audio”. Hold your phone up to a speaker playing a new song you want to know about, and you’ll get the artist and track title sent to you.