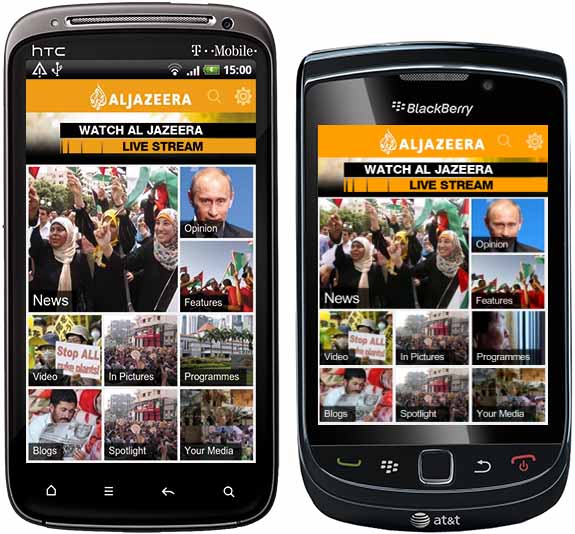 Al Jazeera’s coverage of the explosive situation in the Middle East, most notably their live cameras covering Egypt descending into complete and utter chaos, have earned them an award from the Columbia Journalism School and have also made many people start taking the news channel seriously. Before everyone just thought of Al Jazeera as a channel that spewed out one sided stories to make the Arab world look better than it actually was. Now that they’re officially a big deal, they need to make their content available to people on the go. “Making Al Jazeera available across multiple platforms has been a central component of our distribution strategy,” said Moeed Ahmad, Al Jazeera’s New Media Manager. “Now as well as being able to watch the livestream of the channel, people will be able to consume the rest of Al Jazeera’s online content from their mobile phone.”

Joining the applications already out for Nokia’s Symbian platform and Apple’s iOS, as of today there is now an Android and BlackBerry application out that along with live streaming will give you easy access to top stories and anything else you’re interested in, broken down by category. If you’re going to bother to install this, then also make sure you grab the CNN app, BBC app, France 24 app, and also check to see if your country’s local news organizations have a dedicated app as well. Might as well keep all of them installed so you can hear the stories you’re interested in told from multiple angels, giving you the ability to come to your own conclusion instead of just swallowing what one channel has to say.

We’re just wondering, do any of you actually use dedicated news applications or are you more likely to find out about major events from your Facebook and Twitter friends?

Although we know pretty everything there is to know about the upcoming Motorola Droid X2 aka Daytona, we did want...