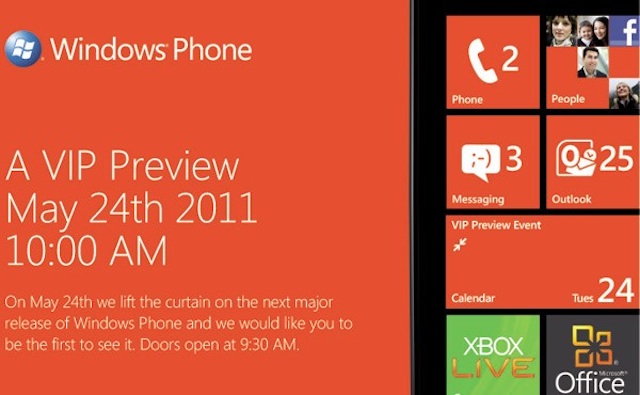 It’s no secret that Microsoft has an update to Windows Phone coming out later this year that’s codenamed Mango. We think it’s going to be called Windows Phone 7.5 when it does eventually hit, and many of the new features inside have already been either announced or leaked. There’s a new browser, built using the same engine that powers Internet Explorer 9, there’s third party multitasking support, new APIs for sensors that developers can put to good use, Bing Maps will now come with turn by turn navigation, you’ll be able to dictate emails and text messages using your voice, Bing Audio will let you identify the song that you’re listening to, and Bing Vision will let you perform a search by taking a picture of a barcode, CD/DVD cover, book or poster. Now with that in mind, Microsoft has just sent out an invitie for an event they’re hosting in New York City that they’re calling “A VIP Preview”, with the subheadline reading “On May 24th we lift the curtain on the next major release of Windows Phone and we would like you to be the first to see it”.

This officially makes the next 30 days some of the most exciting in the industry. Today and tomorrow Google is hosting I/O, and they’re expected to talk about the future of Android. On the 17th Nokia is hosting an event in Greece, and we have no idea what that’s going to be all about. And finally on June 6th, now less than a month away, we’re going to see what the next version of iOS is going to have inside.

The second half of this year is really shaping up to be much more interesting than the first. Here’s hoping the CEO of NXP is right when he says that between 40 million and 100 million NFC enabled devices will ship by the end of 2011. That’s something we’ve been waiting for for ages.

Microsoft to buy Skype for about $8.5 billion, and no one really knows why

Skype has been in the news recently because of rumors spreading around that either Google or Facebook were going to...