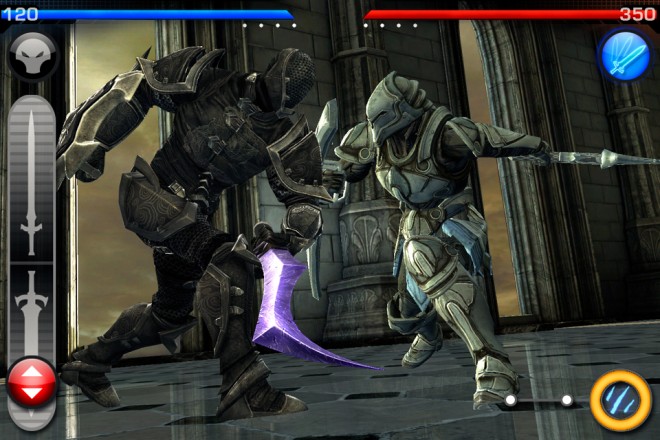 When Infinity Blade was released last December, an update was teased that would allow Infinity Blade players to battle one another in glorious sword & shield multiplayer battle. The first update that was released gave players new swords, raised the level cap, and allowed for in-app purchase. Another update called “The Deathless King” came just a few months ago and added a ton of new content, but it still wasn’t the update everyone has been waiting for. It looks as though the multiplayer update will finally see the light of day as ChAIR Entertainment has just announced a new update for Infinity Blade will be made available this Thursday.

Thursday’s update will be called Infinity Blade: Arena and, as you can guess by the title of the update, one of the modes that will be making its debut is the Arena. The Arena allows players to assume the role of either a Titan or Knight to challenge their friends through online multiplayer through Game Center. If it were up to me, I’d always choose the Titan as I like to intimidate my friends with its awesome size and fury since I’m quite the opposite in real life.

Not only will there be a new Arena mode, but ChAIR is also releasing a number of other goodies in the Infinity Blade: Arena update. One of which is a new survivor mode which lets players face off against wave after wave of Titans in order to see how far you can make it with your knight. New holiday helms that reflect every season and over two dozen new magic rings, swords, shields, and other helmets will also be made available for you to master. And if that wasn’t enough, new achievements, leaderboards, Facebook integration, and “some new surprises” will also be awaiting players when the update goes live this Thursday.

If you already own Infinity Blade, then you’ll receive the update at no additional cost. But if you have yet to jump into one of the must-have games on iOS, then this would be an ideal time to finally pick it up as this update is the one that we’ve all been waiting months for. If you still need some convincing, then feel free to check out our review.

I love thin and sleek devices as much as the next gadget fanatic, but when we hear that Apple is...