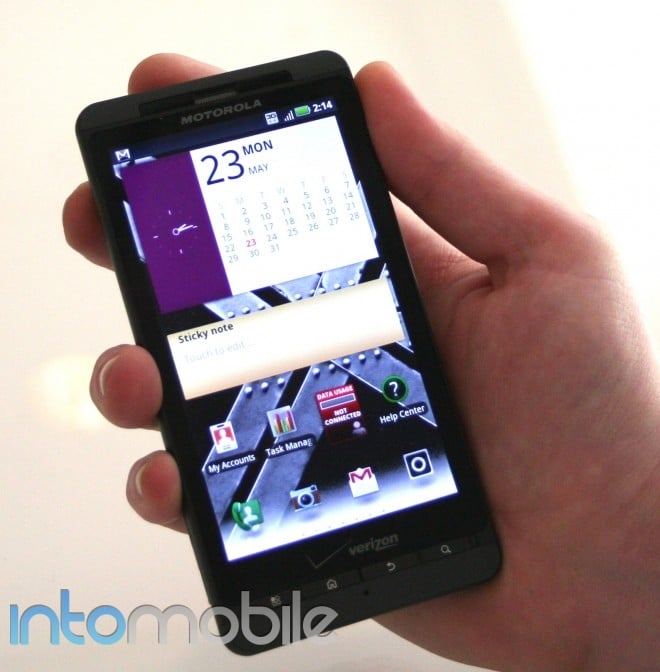 It’s here, folks. We’ve been playing around with the upcoming Motorola Droid X 2 now for a couple of days and so far we like what we see. While the differences on the outside are few, Motorola has given the Droid X 2 a snappier processor and a better display that makes it a worthy follow-up to the original.

The Droid X 2 looks almost identical to its predecessor. Sporting the same design and size, there are only a few things that differentiate the two handsets with the naked eye. But it’s when you look at the spec-sheet of the DX2 that you get a feel for what kind of power lies underneath the hood.

The face of the device remains largely the same of the original but this time around Motorola has given the Droid X 2 a qHD display like the Atrix 4G. Even on a 4.3 inch screen, the 960 x 540 resolution makes for a great viewing experience. Motorola was also nice enough to cover the high-resolution display with a scratch-resistant, anti-glare layer of Corning Gorilla Glass. This alone may make people very happy as the original Droid X’s display was covered by plastic and pressing too hard would result in color distortion.

You’ll find the four standard Android buttons along the bottom with the microphone above it. Above the display is where the earpiece, as well as the notification LED, proximity and ambient light sensors are found, with Moto’s logo right below. On the right side of the device you’ll see that Motorola has done away with the dedicated camera button, which may be a downer for some. Now the DX2 only houses the small, metallic volume rocker that we wish was just a little bit bigger but it still gets the job done.

The left side of the device is where you’ll find the charging port and the HDMI port that can playback 1080p video when hooked up to a HDTV. Up top, the Droid X 2 sports the centralized power/lock key, 3.5 mm headphone jack, and a noise-cancelling microphone when recording video. The Droid X 2 has the familiar hump on the back of the device, and that’s where the 8 megapixel camera lives. Still sporting the dual-LED flash, the camera can take some decent shots, but we’re still scratching our heads as to why the handset can’t record in 1080p.

Last but not least, you’ll find the speaker grill and one more microphone for recording video. Opening up the back plate of the handset is very easy and only requires you to slide down on the curved edge. Removing the plate will reveal the 1500 mAh battery as well as the microSD card slot that’s sadly not hot-swappable. Instead of just throwing in a 16GB microSD card into the handset Motorola has given the Droid X 2 8GB of internal storage (but only 6GB is available to the user) and a 8GB microSD card pre-installed.

Possibly the best upgrade of the Droid X 2 is the fact that it ships with the NVIDIA Tegra 2 dual-core processor, making it blazing fast.  The expected WiFi (b/g/n), GPS,  and Bluetooth 2.1+EDR are all present, making this a well-rounded, worthy successor of the original that we liked so much last year.

Stay tuned for the software tour and full review soon!

While Android 3.0 Honeycomb itself still needs some polish, prices for tablets running the software may need it anymore. We...