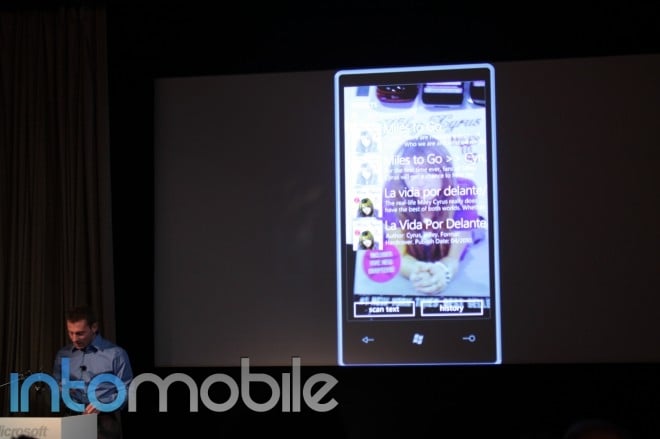 You were probably watching our live blog so you know that Microsoft finally officially unveiled Windows Phone Mango and this software update delivers multiple new features (at least 500, the company claims).

We already knew many of the upcoming features in Windows Phone Mango, as the company has been showing these off for months. As expected, there will be deep Twitter integration, SkyDrive support and third-party app developers will now be able to use the multitasking functionality. There’s also improved enterprise features like boosted e-mail and search.

It’s neat to see that Windows Phone Mango will soon have IE9 as its browser and the company is saying that this is the full version that delivers desktop experience. It may be hard to believe, but the latest version of IE is actually pretty darn good and I can’t wait to see it on my handset.

Along with the Twitter integration, you can now have your LinkedIn connections in your messaging. Also, look for linked inboxes (yes) and built-in speech to text for hands-free operation when you’re driving or just being lazy.

The app will also be getting a boost with Windows Phone Mango, as third-party app makers can now access the live tile features of the UI on the home page. Also, look for the App Connect feature to allow you to see apps in your search results and hubs.

Bing is also getting an update with this software and it may finally be as good as the iOS version. Along with performance improvement, Bing Vision will let you use the camera to look up product information.

Just as exciting as all the new features, Microsoft also announced that it had signed on more hardware partners including Acer, Fujitsu and ZTE. These will join Dell, HTC, LG, Nokia and Samsung.

Look for Windows Phone Mango to land this Fall. What do you think of this update? Is it enough to satisfy you or is it too little, too late?

Check out the promo video below to get you pumped up.