It took Apple so damn long to get the white iPhone 4 out that an enterprising teen took it upon himself to help the masses. Last November, we learned that Fei Lam, a 17 year-old high school student in New York, made nearly $130,000 in just six months selling white iPhone 4 conversion kits. The parts for the kit were allegedly from Foxconn, manufacturer of the iPhone, so Apple decided to take legal action against the entrepreneurial youngster.

Apparently, Lam knew a guy who knew a guy who had access to the parts coming out of Foxconn, and decided to set up a website selling the conversion kits. As soon as Lam was contacted by the authorities, his website disappeared. 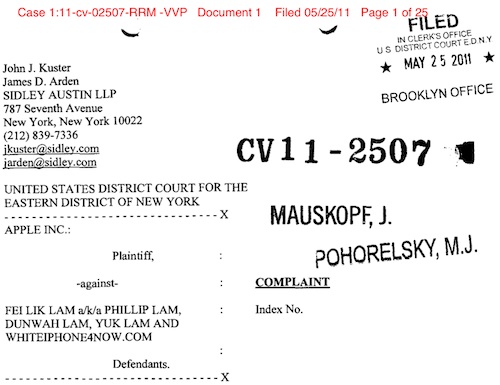 On May 25, Apple finally got around to filing the lawsuit against Lam and his parents. Oddly, however, Apple filed an immediate dismissal of the lawsuit at the same time. Is it possible that Lam and his family settled the case with Apple prior to the filing? According to the claim filed:

Defendent Lam willfully and without authorization has used Apple’s trademarks in connection with the sale of his “White iPhone 4 Conversion Kits,” which among other things included white front and back panels with Apple’s logo and “iPhone” trademarks that are used in connection with the promotion and sale of Apple’s well known iPhone 4 handheld mobile digital electronic devices. Defendant at all times knew that Apple never has authorized the sale of white panels for its iPhone 4 mobile devices, and that he obtained these panels from sources that were not authorized by Apple or any of its suppliers to sell them.

Apple also obtained copies of communication between Lam and his sources and included Lam’s parents in the suit for aiding and abetting the activity.

I’m sure the teen learned a hard lesson, though Apple still has the right to refile the claim in the future if it decides to do so. If there is one thing we’ve learned in recent years, it’s that you don’t ever want to mess with Apple legal.