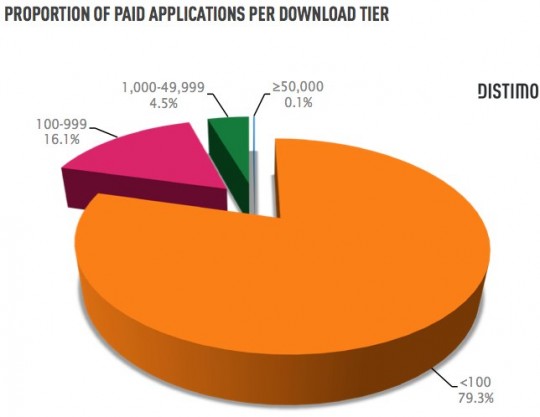 Having owned and used both Android and iOS devices the past few years, I was convinced that fewer people were paying for apps on Android Market versus the iTunes App Store for iPhone, iPod touch and iPad. Why? It was simple. Most new iPhone owners already had iTunes accounts that they used to purchase music and movies in the past. Buying iOS apps was just as easy and painless.

In the Android Market, on the other hand, things were a bit more disorganized. In its earlier stages, prices were sometimes marked in dollars or in pounds. To further complicate things, most people didn’t know whether they should pay with credit cards, a Google Checkout account or whether carrier billing worked. It was just a mess. And now we can even get apps from third-party providers like Amazon.

Off to a bad start, the purchasing habits carried over to today, where nearly 80% of paid apps in the Android Market have been downloaded less than 100 times. Android Community reports:

In the competitive gaming segment, only five titles in the Android Market have been downloaded more than 250,000 worldwide. In contrast, ten iPhone games in the App Store were downloaded in excess of 250,000 times in the US in the past two months alone.

Of course, this is bad news for many developers who are fighting for attention in the Android Market and ultimately getting paid for their work. For their sake, and the sake of Android users who want quality apps – presumably without ads – I hope a more simplified payment system and an easier-to-navigate Android Market gets done soon. To be fair, it has dramatically improved the past year, but a few UI tweaks and clarity in terms of paying for apps would help a great deal.

Microsoft gets $5 from HTC for every Android phone

Citi Analyst Walter Pritchard says Microsoft is earning a licensing fee of $5 per Android device made by HTC. This...