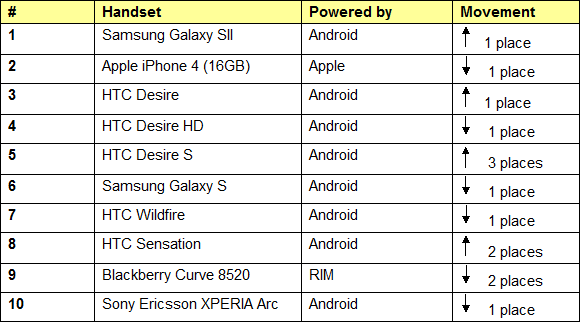 We’ve seen this happening in Japan and now the citizens of the UK are following suit, with more of them preferring the Samsung Galaxy S II over iPhone 4 during the month of May. However, it’s worth pointing that HTC still dominates, occupying 5 spots in the top ten list. Among HTC’s device that sold well in May, we find the original Desire, Desire HD, Desire S, Wildwire and Sensation (which we expect to further climb on the list).

Biggest climber was the HTC Desire S, which managed to jump three places since April. As for the biggest faller, it’s the Blackberry Curve 8520, which obviously isn’t as cool as it used to be.

As you can see from the table above, Android keeps taking over the world, with 8 out of 10 phones on the list running Google’s mobile platform.

Finally, in case you wonder, the information comes from the uSwitch.com Mobile Tracker, which ranks the most popular handsets based on live searches and sales…