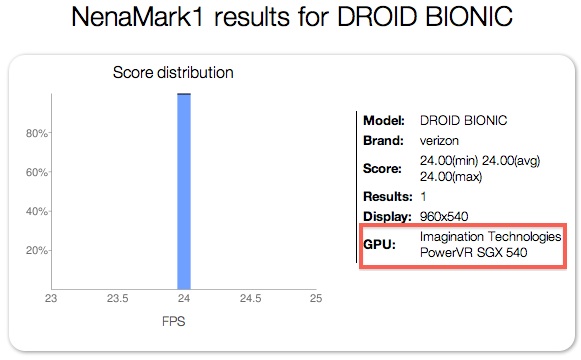 Roughly 5 months ago Motorola announced the Droid Bionic for Verizon. The press materials said it would pack a dual core NVIDIA Tegra 2 processor inside and that it would also be able to utilize Verizon’s high speed 4G LTE network. Several weeks ago rumors were floating around on the internet saying the Bionic got canceled, but a spokeswoman from Motorola told us that: “Based on compelling feedback since the show [CES 2011], we are incorporating several enhancements to make this an even better consumer experience.” Just what sort of enhancements did Motorola have in mind? We would understand if they wanted to ship the the handset with a newer version of Android, but now, thanks to a benchmark that was submitted to NenaMark, we believe that the Droid Bionic is getting a total brain transplant. Said benchmark shows that the Bionic now features an Imagination Technologies PowerVR SGX 540 GPU, something that’s definitely not in the Tegra 2, but is in the Texas Instruments OMAP 4430 and 4440, which is rumored to be inside the as yet to be launched Motorola Droid 3.

Switching the processor so late in a product’s development cycle poses several questions: Is NVIDIA having trouble supplying Tegra 2 chips to hardware manufacturers? Is the Tegra 2, when paired with an LTE capable modem, delivering unacceptable battery life? Is Motorola migrating away from NVIDIA because Texas Instruments gave them better pricing? And then there’s the obvious, so when is the damn Bionic going to ship, if ever? All of these will be answered in time, but it’s starting to become an increasingly frustrating experience to have operators announce devices several months before actually bringing them to market. The latest of such fiascos was the Samsung Infuse 4G for AT&T that only recently began shipping, despite the fact that it too was announced at CES 2011 in January.

Update: NVIDIA recently reached out to use to clarify some things about the Tegra 2 and LTE modem compatibility:

“Tegra 2 has absolutely no compatibility issues with LTE. In fact, Tegra 2 interfaces with many types of modems via standard interfaces, including LTE. There is nothing inherently unique about LTE as far as Tegra 2 is concerned. In fact, there will be Tegra 2 and LTE-enabled devices available soon. Unfortunately due to NDAs, we can’t communicate exact devices or timeframe.”

So whatever the change of heart may be with the Bionic – and that’s to say that it will ship with a TI dual-core processor, it has nothing to do with the compatibility with the Tegra 2. Now if Motorola could just come and clear the air.

Samsung is the jewel of South Korea, so it's no surprise to hear that their phones are some of the...