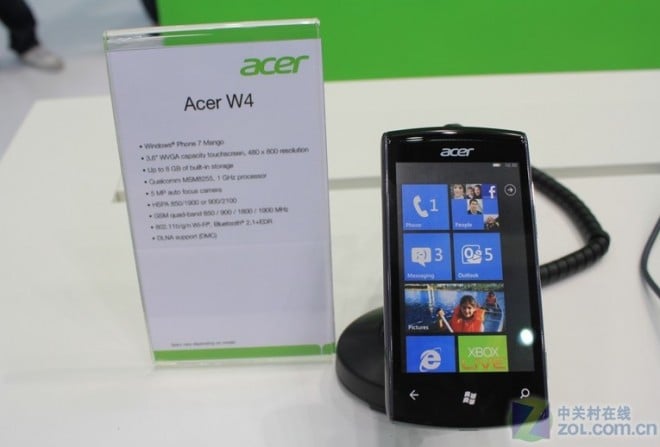 Just about a week after Acer said it’s on the Windows Phone Mango train, the company introduced a new handset at the Computex trade show.

The Acer W4 is similar to the current crop of devices out there in terms of specs, as it rocks a Qualcomm MSM8255 Snapdragon processor at 1 GHz, a 3.5-inch WVGA capacitive screen at a 480 x 800 resolution, WiFi, Bluetooth 2.1, quad-band GSM support and a 5-megapixel camera. The handset will also rock 8 GB of internal storage.

The real star of the show should be the software, as the Acer W4 should launch with Windows Phone Mango later this fall. This is the version of the platform which should put it nearly on par with iOS and Android in terms of features.

One of the cool things about Windows Phone Mango is that third-party applications will finally be able to do true multitasking. This has been available in Microsoft’s programs from the get-go but third-party apps have had to use a hibernate and resume mode. This worked well enough but I found it took too long for some apps to wake up, leading to a bad experience.

The multitasking interface on Windows Phone Mango will sort of be similar to webOS because you can push the app up into a card-like interface and pan to other running apps. There’s no word on how this third-party multitasking will impact battery life but let’s hope that’s something Microsoft is taking into consideration.

The Windows Phone Mango software will also enable a new class of apps, as the latest tools give developers new hooks into the system. For example, app makers can now have access to the camera and sensors, so you can look forward to bar-code scanners and photo-sharing apps.

We’re hearing that the Acer W4 will come out at an “affordable” price, so we’ll have more for you as the release date nears.

After reaching a milestone of 6 million users, SPB Software is bringing its popular mobile TV application to yet another...