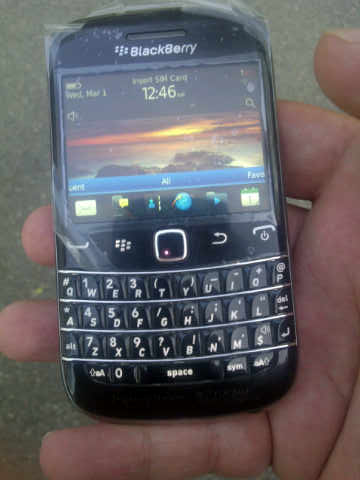 RIM has already announced their next-generation BlackBerry Bold, but apparently they have another waiting to to be released into the wild. Just like the Bold 9900, the 9790 will run on OS 7, have 8 GB of internal memory, rock a near-field communications chip, and be in a similar touchscreen/QWERTY candybar form factor. The source says it runs significantly faster than most BlackBerry models, so it likely has one of RIM’s new 1 GHz processors in there.

Stylistically, it looks an awful lot like the Bold 9780, though the rear camera is set in the new style, and the top corners are more rounded. It looks like RIM is also opting for flush call, hang up, menu, and back keys, much like the Storm2 and Curve 9300. It’s a bit of a confusing device on the one hand, since the Bold 9900 seems to already cover many of the same bases as this 9790; is there really any good reason for both phones to exist? That being said, it’s entirely possible that this was simply a pre-production prototype.

Between the Bold 9790, 9900, Torch 2 9810, Curve Apollo, Monaco/Monza/Volt, and the Curve Touch, RIM’s lineup for the rest of the year is looking very busy. Based on what we’ve seen, they’re clearly interested in meeting the competition in terms of specs, and aggressively pushing new frontiers by slapping NFC into pretty much all of their next-gen devices.

We’ll be keeping an eye out for detailed specifications like screen resolution and camera quality.

Apple's Worldwide Developer Conference is coming up, and they've just announced what we can expect to hear about. The long-rumoured...