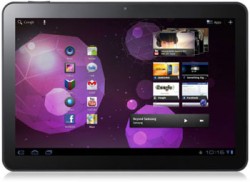 Interesting news this morning concerning Android 3.1 and the Samsung Galaxy Tab 10.1. Rumor has it that both the software build and the much-anticipated Android tablet have been delayed until August in most countries, per Google’s order. Is Google giving the shaft to Samsung to fix a couple of underlying bugs in 3.1 or is this a useless rumor?

This comes to us from a couple of tweets by Eldar Murtazin, Mobile-Review.com’s Editor in Chief,

Launch of Google android 3.1 postponed to august in most countries. You couldnt buy new tablets with it untill this time. Good news for aapl

Samsung tablets 8.9 and 10.1 delaying untill august in europe due to android 3.1 issues and thats google decision

If this turns out to be true then the first real iPad-rivaling Android tablet may not be making its way into customers’ hands until two months from now, which is likely pretty frustrating for many potential buyers. This is also bad for Samsung given it’s got a major head start in the Android tablet competition and its latest offerings are probably the best we’ve seen.

So is this possible? Could Google really have delayed Android 3.1? If this turns out to be true, it best be for good reason as delays like this are really going to turn some people off. Whatever the reasoning behind this supposed delay may be the search giant better throw in some great features that have yet to be implemented into the OS when August comes around.

If we won’t be seeing the Galaxy Tab 10.1 until August, one could imagine that other tablets like the Toshiba Thrive could – well, thrive. Toshiba’s tablet offering is feature-packed and affordable, even more so than Samsung’s Galaxy Tab 10.1, but the latter is much thinner and lighter than the Thrive. Then again, the rumor states that the software and tablet will only be delayed in certain countries, with Europe being one of them.

If this turns out to be true, Google better have an official statement regarding the matter for us soon.

One of Sprint's market directors has accidentally let slip in a personal blog that they'll be selling the 16 GB...