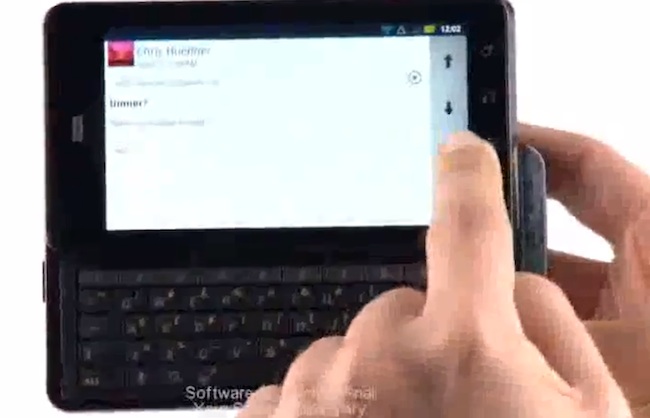 Motorola has only just recently begun shipping their Droid X2 on Verizon, but it looks like it’ll soon be outdone by an unannounced device called the Droid 3. Videos obtained by PhonePads show off the as yet to be announced Motorola smartphone and it’s due to pack an 8 megapixel camera, have 1080p video recording, and a 5 row QWERTY keyboard. Like the X2, it’ll pack a mini HDMI port, along with micro USB, and we’re hopeful that there’s an NVIDIA Tegra chip inside this thing. While we don’t know how much it’ll cost or when it’s due to be officially announced, we wouldn’t be surprised to see this device become a part of Verizon’s back to school portfolio. They can pitch it as the most powerful smartphone for people who love to text, which in most cases is code for anyone between the ages of 13 and 30; oh and in Europe the Droid 3 will likely be released as the Milestone 3.

If you’re excited at this point then we hate to break it to you, but Motorola has a long history of bungling their Android devices with a software layer on top known as “Blur”. For some odd reason, they think they can do a better job at building a user interface than the folks at Google, and they force you to use their clumsy, often unstable, skin in order to fully enjoy their devices. Experts out there will try and flash this thing with a custom ROM, such as the widely popular CyanogenMod, but it’s the ordinary common man who has to struggle with a subpar experience all in the name of a hardware vendor trying to differentiate themselves from the competition.

Expect a review of this bad boy once it comes out. Hope we’ve managed to set your expectations appropriately.