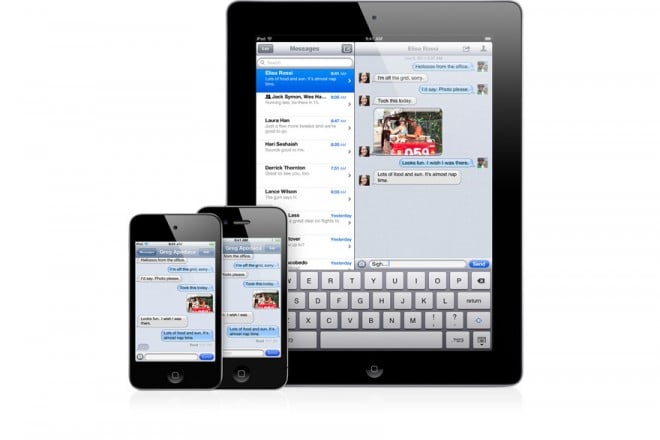 Yet another announcement out of WWDC today was a new service from Apple called iMessage, that is pretty much identical to RIM’s BlackBerry Messenger client. iMessage will let you send and receive text messages, photos, and contacts from other iOS users. Group messaging and read/unread/typing notifications (which are staples of BBM) can also be found in iMessage. Incoming iMessages show up with the new iOS 5 push notification system at the top of the screen, so you won’t be interrupted with an irritating pop-up anymore. There have been plenty of third party applications that have been trying their hand at these features, particularly to make it all cross platform. Kik and Whatsapp are some examples, but there are plenty out there.

The biggest difference to me is that Apple already has a head start on video chatting with Facetime, and if paired up with iMessage, we could see a really accessible video chat application that’s tied deeply into the operating system. Apple users are also more prone to pick up multiple iOS devices, making iMessage easily accessible no matter which screen you’re in front of – unfortunately, that’s not a bragging right BlackBerry can claim. All of that being said, I worry that iMessage will ultimately become more popular than BBM, but in the grand scheme of things, I think open, cross-platform instant messaging clients like AIM and Google Talk are more likely to win out. The one ace up RIM’s sleeve may be their willingness to launch an iPhone app, though from what I had heard from RIM folks, they prefer to keep BBM as an exclusive selling point.

It seems to me that like RIM, Apple’s trying to get individual social groups all on the same page, so that when shopping for a new phone, the instant messaging app becomes the clincher for a sale. iMessage will be a part of iOS 5.0 launching this fall. With any luck, it’ll launch on a new device.