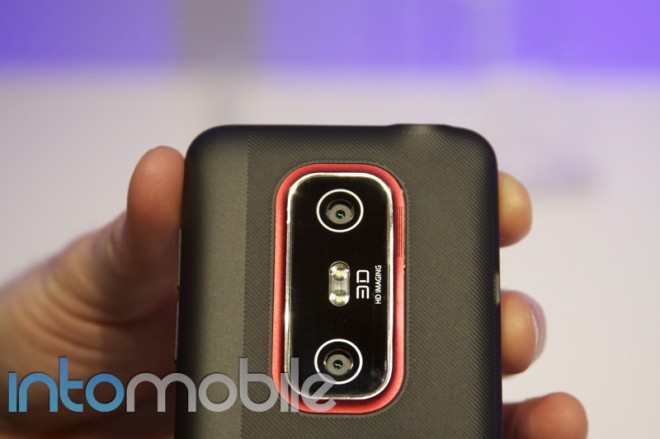 Ever since we caught a first glimpse at the HTC EVO 3D and the EVO View at CTIA 2011, we’ve been drooling. The EVO 3D is Sprint’s first 3D smartphone and it isn’t a slouch in the hardware department. It shoots 3D photos and video and allows your to view 3D content, too. It’s running Android with Sense UI and sports a 1.2GHz dual-core processor. The View 4G, a new Android tablet from HTC, is the first Android tablet with 4G WiMax capabilities. So Internet use on it will be nice and speedy where Sprint WiMax is available.

We were also told by Sprint, “Customers can pre-order HTC EVO 3D or HTC EVO View 4G at any participating Sprint Store with the purchase of a $50 Sprint gift card (per device), and on June 24, Sprint Stores nationwide will open doors at 8 a.m. local time for customers to get a jump-start on purchasing these hot new devices. Additionally, Sprint Premier customers will have the opportunity to purchase HTC EVO 3D online three days before the national launch, while supplies last.”

How much will you have to fork over for these new Android devices? The HTC EVO 3D will fetch $199.99 with a new, two-year contract and the HTC View 4G will go for $399.99 – an excellent price for an Android tablet.

For more details, see the press release below.

OVERLAND PARK, Kan. (BUSINESS WIRE), June 06, 2011 – Two of the “must-have” gadgets of 2011 are getting ready to make their debut. Sprint (NYSE: S) today announced the June 24 availability of HTC EVO™ 3D and HTC EVO View 4G™ on America’s Favorite 4G Network1. America’s first ‘glasses-free’ 3D 4G device will be available for $199.99, and HTC EVO View 4G, the first 4G tablet in market, will be available for $399.99. Both prices exclude applicable taxes, and the devices require a new two-year service agreement or eligible upgrade.

Customers can pre-order HTC EVO 3D or HTC EVO View 4G at any participating Sprint Store with the purchase of a $50 Sprint gift card (per device). On June 24, Sprint Stores nationwide will open doors at 8 a.m. local time for customers to get a jump-start on purchasing these hot new devices.

Additionally, Sprint Premier customers will have the opportunity to purchase HTC EVO 3D online three days before the national launch, while supplies last. Qualifying customers will receive an email on June 21, or they can log on to their account at www.sprint.com on June 21, click “show me my rewards” and then “Sprint Premier Community” for more information.

“Sprint takes device innovation to a whole new level with the two newest members of the EVO family, HTC EVO 3D and HTC EVO View 4G,” said Fared Adib, senior vice president – Product Development, Sprint. “HTC EVO 3D provides our customers the ability to capture and view content in 3D and share at 4G speeds; HTC EVO View 4G expands on the capabilities of tablets by introducing the digital pen, and allows our consumers to do more than they ever imagined was possible.”

Respected device critics agree Sprint has done it again with HTC EVO 3D. Here are a few of the accolades that poured in when it was announced in March:

HTC EVO 3D requires activation on one of Sprint’s Everything Data plans plus a required $10 Premium Data add-on charge for smartphones. Sprint’s Everything Data plan with Any Mobile, AnytimeSM includes unlimited web, texting and calling to and from any mobile in America while on the Sprint Network, starting at just $69.99 per month plus required $10 Premium Data add-on charge – a savings of $39.99 per month vs. Verizon’s comparable plan with unlimited talk, text and web.2 The Mobile Hot Spot option is available for an additional $29.99 per month (excluding taxes and surcharges) supporting up to eight Wi-Fi enabled devices simultaneously.

HTC EVO View 4G brings the best of the EVO experience to a tablet design with a 7-inch touchscreen, 1.5GHz Snapdragon processor and latest version of HTC Sense. It will launch with an Android 2.3 operating system (Gingerbread) and will be updated to Android 3.0 (Honeycomb) when it is available for a 7-inch tablet. As the perfect combination e-reader, media player and portable computing device, HTC EVO View 4G offers a premium entertainment experience with HD-like quality video and a rich web-browsing experience with the ability to browse the web on Flash-enabled sites.

Rate plans for the HTC EVO View start as low as $34.993 per month for 3GB of 3G data and unlimited 4G data usage while on the Sprint network. Unlimited text, picture and video messaging are included at no charge. Additional plans, including 3G-only plans, are available to meet customers’ needs.

Additionally, for a limited time, any customer who purchases HTC EVO View 4G will receive the HTC Scribe™ digital pen (otherwise sold separately) at no charge with a two-year service agreement – providing an additional savings of $79.99 on their purchase.

Optional add-on services include GPS Navigation for $2.99 per day or $10 per month and the Mobile Hot Spot option for $29.99 per month (excluding taxes and surcharges) supporting up to eight Wi-Fi enabled devices simultaneously.

As the first national wireless carrier to test, launch and market 4G technology, Sprint made history by launching 4G in Baltimore in September 2008. Sprint also ranks as the most improved company in customer satisfaction, across all industries, during the last three years4. Sprint currently offers 4G service in 71 markets in 28 states. For more information, visit www.sprint.com/4G.

Sony Ericsson Urushi will be a smaller Xperia Arc

Some shots of an upcoming Sony Ericsson handset, code-named the Urushi ST18i, have bubbled up, alongside some general specs. The...