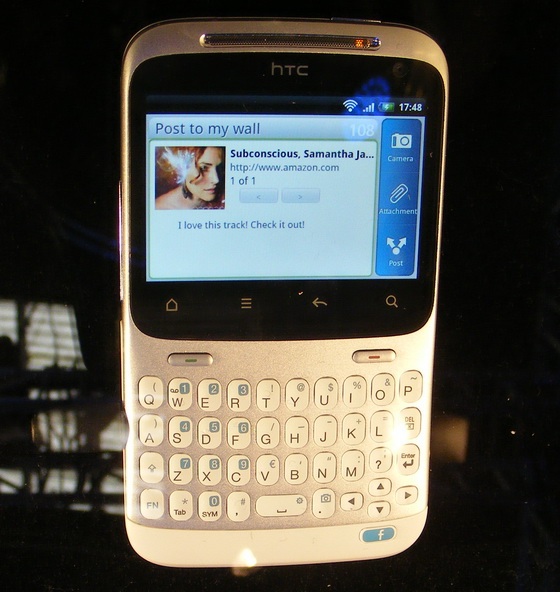 Back in February of this year HTC launched an Android smartphone known as the ChaCha. It’s unique for two reasons. First, it’s one of the few Android devices that come in what many refer to as the “BlackBerry form factor”, otherwise known as “QWERTY monoblock” in industry parlance. Second, it has a dedicated Facebook button on the bottom of the device. When pressed, you’ll instantly be taken to Facebook where you can share whatever it is you previously had on your screen. When it was revealed to the public, the ChaCha specification sheet said it would come with a 600 MHz processor. Looks like that’s changed as HTC’s official ChaCha page now lists an 800 MHz processor. That extra frequency boost is likely due to HTC’s often resource intensive Sense UI that they throw on top of Android; mind you, that’s just an opinion. Other specs for those interested in this smartphone: 2.6 inch 480 x 320 pixel screen, 5 megapixel camera, 1250 mAh battery, WiFi b/g/n, Bluetooth 3.0, 3.5 mm headphone jack, front facing VGA camera, GPS, quadband GSM/EDGE, and dualband (900/2100 MHz) 3G.

Now the question is should you buy this thing? If you’re a Facebook addict, then there’s no reason why you shouldn’t, but we advise you to get something with a larger screen since it’ll provide a better web browsing experience. That and there are many other Android devices out on the market with better cameras, something you’ll likely need if you plan on snapping pictures of all your hipster friends. Also note that if you’re really, and we mean really, into Facebook, then Microsoft’s Windows Phone operating system is what many are calling the best implementation of Facebook integration to ever ship on a mobile device.

But seriously, dedicated Facebook button? It screams gimmicky garbage. How hard is it to hit the home button and then tap the Facebook shortcut?