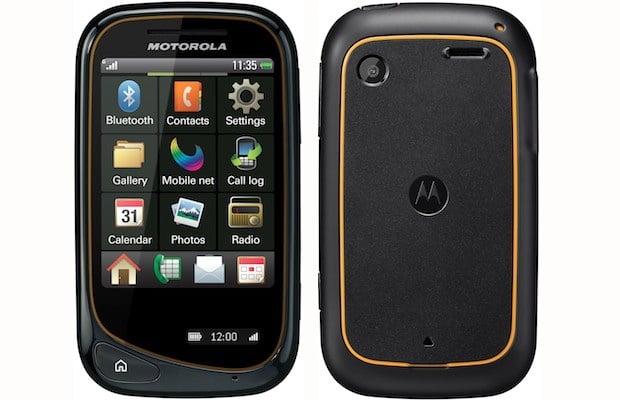 Last month we saw an interesting Motorola handset leak called the EX130. We knew it was going to be a budget feature phone, but what made it unique compared to every other boring feature phone we tend to cover was the tiny little secondary screen on the bottom of the device. We’re used to seeing clamshell phones with two screens, one on the inside where you do everything you need to do, and one on the outside that’s useful for showing who’s calling you, who texted you, and the time/date/battery/signal. On a device that’s one big monoblock, putting a small ticker on the bottom serves much the same purpose, and we think it’s absolutely genius since lighting up that large touchscreen just to read a notification is easily the worst way you can kill your battery.

Anyway, the EX130 moniker is no more, this thing is now known as the Motorola Wilder. It’s waterproof, dustproof, runs Qualcomm’s Brew MP feature phone operating system, has a 2.8 inch resistive 240 x 320 pixel touch screen, secondary 96 x 16 pixel screen, 2 megapixel camera, features an FM radio, 3.5 mm headphone jack, the ability to run J2ME apps, Bluetooth, and a 910 mAh battery. It’s coming to the UK next month, exclusive to Carphone Warehouse, and it’ll run you just £50 ($80). Should you buy it? The sad conclusion that we come to at most near every feature phone we write about here at IntoMobile is that no, buying something that doesn’t run either Android or Symbian is just plain dumb. Granted, the waterproof and dustproof features may prove handy to UK teens who are going to go to festivals this summer and will no doubt stumble on their best mate’s vomit and fall flat on their asses.

What say you, are you wild for the “Wilder”? That pun is surely going to send us to hell.

Motorola CEO Sanjay Jha stirred up a little controversy by seemingly saying that the poor performance on Android phones could...