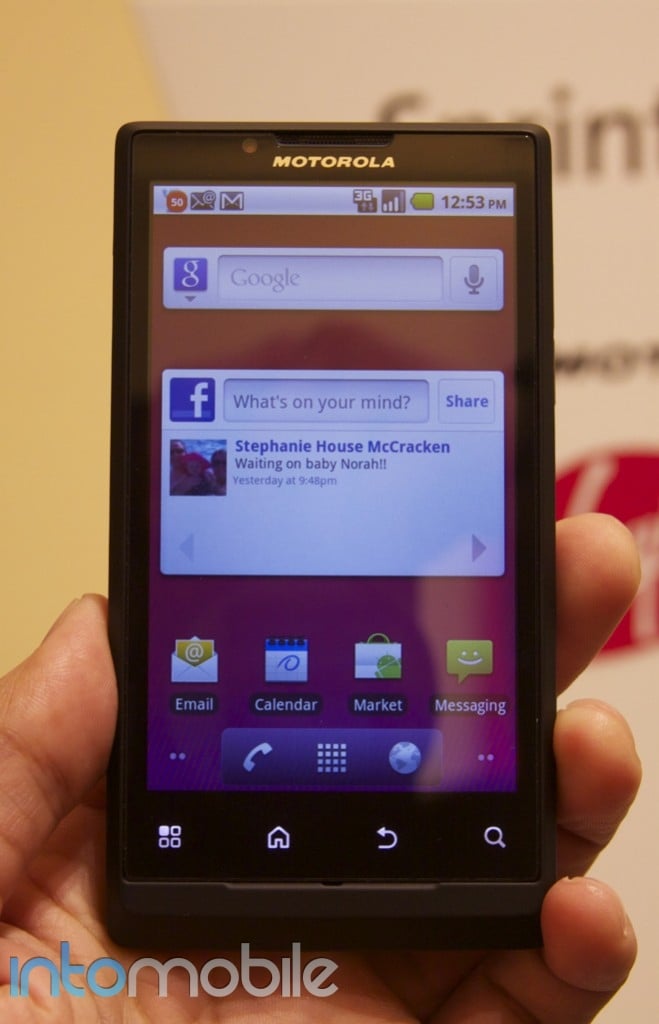 Sprint announced today the Motorola Triumph for its partner, Virgin Mobile. The Triumph is an Android 2.2 Froyo device for the pre-paid crowd, and it isn’t half bad, either. It has a 4.1-inch touchscreen display and a 5MP rear camera that can shoot HD video. The device also has a front-facing VGA camera for self-portraits and video calling.

The Motorola Triumph is running vanilla Android, which I’m particularly happy about, and it seemed pretty speedy to me. Its design is also very Droid-esque – and I’m talking the original Droid with its soft-touch coating, flat sides and gold accents. The Triumph is like a slab without any fuss in the design. On the upper left, there is the standby/power button, and on the right you have the volume rocker. There isn’t a dedicated camera button, which is slightly disappointing, but I was told that the idea was to make it minimalistic as possible. Goal achieved.

We got a little demo of the HDMI out, which is always nice, and it allows you to view what you’re seeing on the phone on your big screen, HD TV. When you’re playing video or browsing the web, it’s right up there on the screen. And when you switch from landscape to portrait mode, the display changes on the TV, too.

The Triumph for Virgin Mobile will be available this summer, and pricing and details will be announced closer to launch. It’s an impressive Android handset, especially for pre-paid users, so I’m sure Virgin Mobile customers will be waiting impatiently for this one.

See the gallery below.

Motorola and Sprint have finally taken the wraps off of the Photon 4G, a powerful handset that will bring a...