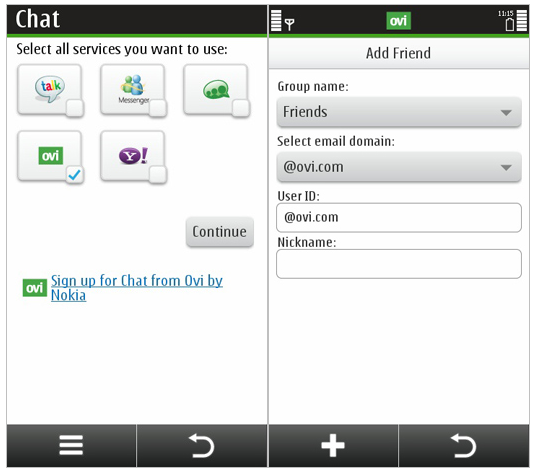 Back in October 2008 Nokia acquired a Canadian company called OZ Communications with the goal of putting their instant messaging client on all future Nokia handsets. Roughly 2.5 years later you can see bits and pieces of OZ’s software on Nokia’s low end feature phones, but devices running Symbian^3, the latest version of Symbian, only got “Ovi Chat” 2 months ago. With Nokia deciding to kill the Ovi brand name, it only makes sense that today they’re announcing “IM for Nokia”. Compatible with the X6, 5230, N8, E7, and various other devices, “IM for Nokia” will let you have instant message conversations with friends on Ovi Mail, Google Talk, Windows Live Messenger, Yahoo! Messenger and MySpace IM. You can grab it from the Ovi Store today, and over the coming months it’s going to start being bundled on new devices. It’s a bit sad that Nokia could have turned Ovi Chat into their own version of Apple’s newly announced iMessage if they only bothered to market the living hell out of it and thrown it on every single handset to leave their factories.

Will instant messaging clients hurt operator revenues since every IM sent is a text message lost? Hard to say, since while text messages are pricy, so is mobile data, and if you’re running an instant messaging client, then chances are you have a high end handset, which in turn means you’re using mobile data a lot. You just can’t beat the ubiquity of SMS either. All you need is a phone number and you can text anyone, anywhere, anytime, and you can be pretty certain that they’ll receive your message. With instant messages you tend to have only conversations with friends who you know use one particular client over the other. Anyway, it doesn’t matter since most operators have unlimited SMS bundles now.