I had an interesting meeting the other day to check out the Eggdrop app and it looks like a cool way to buy and sell used stuff without having to deal with the weirdos on Craigslist or deal with the hassles of eBay.

The cool thing about the Eggdrop app is that it’s mobile first. There will be a web element but the company said it will be similar to Instagram’s web presense – you can view stuff online but the majority of actions will take place on the iOS and Android apps. To sell something on the service, you simply pop open the Eggdrop app, aim your camera at what you want to sell, snap a pic, type in a description and your prices and it’s posted.

I mentioned prices because you can put a starting and ending price that won’t be known to the buyers. Over a specified period of time, your item will drop in price (hence the egg drop). As I mentioned before, it’s a mobile-first experience, as you can use your location to determine which items are near you and you can do all the negotiations through in-app chatting.

Signing up is pretty easy too, as you can sign up via Facebook Connect, Twitter or through Eggdrop. The company doesn’t take a cut of the sales, so there won’t be any fees to hamstring your sales. All of the selling and buying is on the people though, so the same issues that face Craigslist could impact this.

To combat the flake factor, the Eggdrop app is instituting some reputation factors so you can know who is a reliable seller and who isn’t. Like any app, this will need to gain a large user base to truly be useful but it does look like a company that we should be watching. The iPhone app should be live now and look for the Android app to land in about a day. 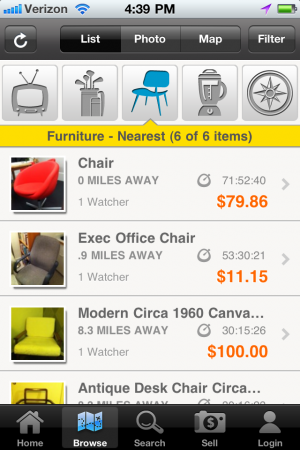 FCC report doesn’t tip how it will rule on AT&T, T-Mobile deal

A new report from the Federal Communications Commission isn't tipping its hand on how it will come down on the...