Yesterday, 4G went live for the first time in Canada, right here in my hometown of Ottawa, Ontario. The first Rogers LTE network was announced earlier last month, and though there aren’t any smartphones available to make use of the (up to) 75 Mbps data speeds, Rogers does have an internet stick to get the ball rolling. Rogers has hinted that Samsung and HTC LTE handsets will be available in Canada before the end of the year. Maybe they’re alluding to Droid Charge and Thunderbolt?

I’m really looking forward to the LTE rollout if only to put a dent into carriers that are marketing HSPA+ as 4G. While the handsets will come in time, it’s hard to get too excited about the network launch without them. At the time of Rogers’ launch event, I was in Toronto looking at the Telus fall lineup, and though they’re planning an LTE rollout eventually, they were more of the mindset “not first, but best”. I only really half-agree there; if you’re first with the network, then you’re also first with the handsets, and you’re the first locking people into 3-year contracts. However, folks that aren’t obsessed with being on the bleeding edge like we are might be more impressed if Telus can launch their network in more markets and with more handsets from the get-go. We can’t forget the little guys, either. Wind Mobile has been testing LTE for awhile, and it wouldn’t be surprising to see them get something out before the end of the year.

It’s good to see that we aren’t that far behind the big American push for 4G, I just hope that we can keep up on handset launches too. Other major centres in Canada are due to get Rogers LTE this fall, including Toronto, Vancouver and Montreal. Anyone interested in picking up the new Rogers internet stick can find it over here. Here’s a look at the initial coverage map. 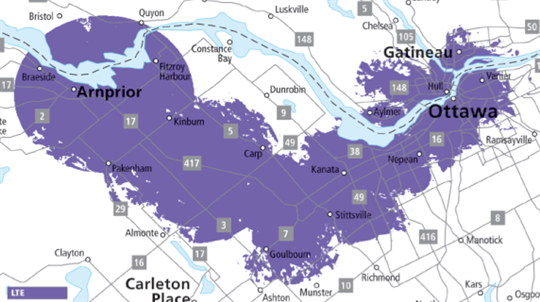 AT&T is serving a "4G" USB modem in the form of the USBConnect Force 4G, available July 17 and totally...