Two of Sprint’s hottest phones will soon be put out to pasture with newer hardware on the way. The screenshot below shows a handful of other handsets that will also be going in the coming months.

In late July or early August, you’ll no longer be able to grab the BlackBerry Style or Motorola i1. While we can’t speak for everyone, we’re just fine seeing the BlackBerry flip-phone and Motorola’s rug(ly)ged push to talk phone go. If you’re one of the nine people who collectively own these handsets, it’s time to upgrade.

In September we’ll see some better handsets leave the carrier, including the BlackBerry Curve 3G, BlackBerry Bold 9650, and the white EVO 4G. White EVO, we hardly knew you. It actually won’t be until October until we’ll see the black version of the EVO gone for good, as well as the Samsung Transform and Epic 4G. With the Sprint Galaxy S 2 on its way sometime in the near future, those looking for an upgrade from the Epic will soon be satisfied. That said, if you’re looking for a Galaxy S 2, you’re going to have to jump over to AT&T. 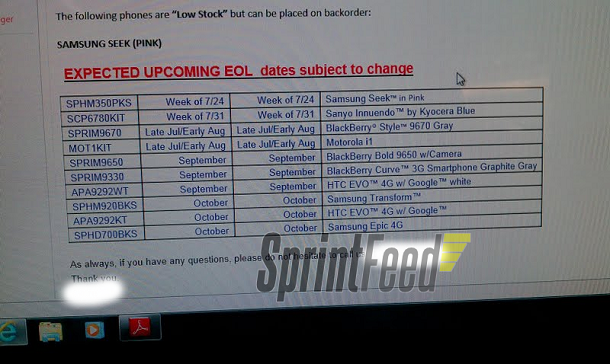 You still have a couple of months before you see all of these handsets reach their EOL and in that time, we may see some price cuts along the way. With the HTC EVO 3D already available, and other, more powerful handsets like the Motorola Photon 4G on the way, Sprint needs to make room for the big dog and one can’t blame them for that.

If you’re still holding on one of these handsets, if you ever need to get a handset replacement through insurance, you may be lucky enough to receive a newer handset than you had.

What new Sprint phone are you looking forward to the most?

Facebook using HTML5 to get around Apple, Google for mobile apps?

Facebook is reportedly in talks with developers about selling apps and games directly through its mobile browser in an effort...