A study done by Retrevo in June of this year on over 1,000 people finds that consumers would purchase a tablet device running Android if it just had the right price tag. Nearly 50% of the people surveyed said they’d get an Android tablet if it had all the features of the iPad, but cost less than $300. That figure jumps up to 79% if the price falls below $250. Asked which brands consumers would consider purchasing a tablet from: 55% said Amazon, whereas Samsung and Dell scored just 38% each, and Motorola and HP scored 31% each. If you’re wondering how that’s possible since adding those numbers up equals more than 100%, we imagine the answer to that question was multiple choice and more than once choice could be selected. Now when it comes to what’s the most important feature a tablet should have to warrant throwing down some hard earned money for, low price came out on top with 48%, followed by 28% saying a higher resolution screen, and finally 20% who want better input methods such as a keyboard. 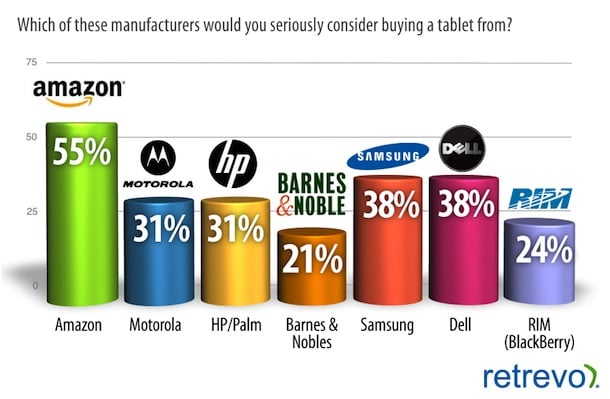 It’s been widely reported that Amazon will come out with at least one Android powered tablet this year. Said tablet will probably use Android as nothing more than a base to build a completly new user experience around. Amazon already has their own app store, movie store, e-book store, music store, and you can even buy physical goods from them, so they can potentially copy the business model of videogame console makers whereby they take a loss on the hardware, but make it up with the purchase of goods and services later on. That would put Apple in a severely difficult situation since like it or not, they depend on the premium they charge for their hardware as a way to continue surviving.

What say you, waiting for iPad 3, iPad HD, or this new Amazon thing?

Survey: 35% of consumers will buy iPhone 5

We all know that the iPhone 5 will be a popular device but a new survey from PriceGrabber suggests that...