Yesterday Microsoft announced that the next version of Windows Phone, which the industry calls “Mango”, is finally done. The code is being shipped to handset and operators around the world, and the hope is that devices running Mango will be on store shelves as early as this September. The question on everyone’s mind of course is who is going to strike first? Who is going to bring the first device to market that runs Microsoft’s interpretation of what a smartphone should be? You’d think the answer would be Nokia since the Finnish handset maker effectively became Microsoft’s bitch on February 11th of this year, but you’d be wrong. The answer is Toshiba-Fujitsu, a Japanese vendor who has no plans to launch their just announced device, the IS12T, outside the land of the rising sun. What’s so special about the IS12T? It’s got 32 GB of onboard memory, a 13.2 megapixel camera, 3.7 inch screen with the classic 800 x 480 pixel resolution, Qualcomm’s MSM8655, which is the heart of Verizon’s HTC Thunderbolt, it’s waterproof, and it weighs just 113 grams while managing to fit in a 59 mm x 118 mm x 10.6 mm body; oh and of course it’s got WiFi, Bluetooth, and GPS, that’s a given. 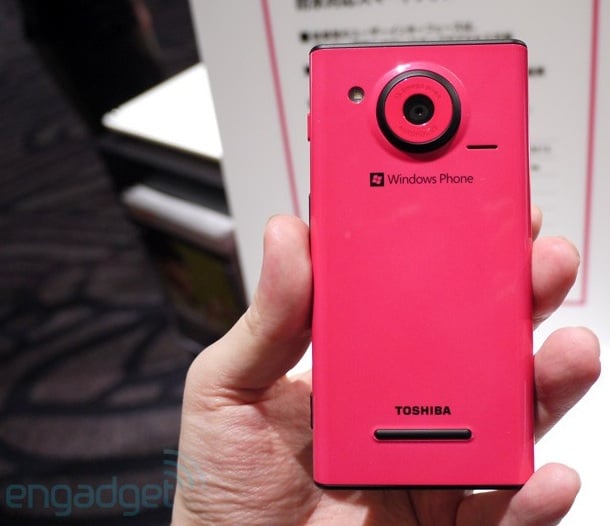 From a design perspective, we can’t help but look at this thing and feel like it’s a ripoff of the Nokia Sea Ray, which itself is nothing more than the Nokia N9, but with the addition of a camera button. Yes, the IS12T is a bit more square, but the design similarity of the design language is uncanny. Then again there’s only so much you can do when your designing a phone that’s nothing more than a slab of glass you poke and prod at. Pricing for the IS12T hasn’t been announced, but seeing as how it’s Japan it’ll probably be free on contract.

Additional images can be seen in this Engadget hands on post.

Update: Thanks to Don Kennedy from DigiInfo TV we have a hands on video:

Windows Phone Mango heads to manufacturers, coming to you soon

Good news, everyone! It looks like Windows Phone Mango has hit a major milestone and is heading to manufacturers, so...