We’ve seen the latest reports from Canalys and comScore and both show just how well the Android operating system is doing these days (pretty well) and Gartner’s latest report shows much of the same. If you had any question as to why Google’s mobile operating system has been under fire so much recently, one only needs to look at the numbers to find out.

In the last quarter of 2011, Android managed to grab 43% of the entire global smartphone market. The growth is pretty ridiculous when you look at where the OS was in the same quarter of last year, which struggled to hold on to 17% of the smartphone market. While 43% of the global market isn’t as impressive as Canalys’ 48%, it’s obvious to see that Android has virtually no competition to get in its way at its current growth rate.

Unless you’ve been living under a rock since 2008, you’d know that the only competition that Android does have today is iOS. Android’s growth and market share are still very much ahead of iOS but Apple’s iPhone is always in the public’s consciousness. Even with a handful of competitors still kicking around, it’s easy to see that this is an Android and iOS world, and everything else pretty much falls to the wayside.

While we’re already half way through 2011, we still haven’t seen the year’s best offerings. With the iPhone 5 and the very first Android Ice Cream Sandwich devices on the way, there’s still a lot to see this year, and will pave the way for a very interesting 2012. One thing is certain, though, and that’s that Android will likely still be leading the way. 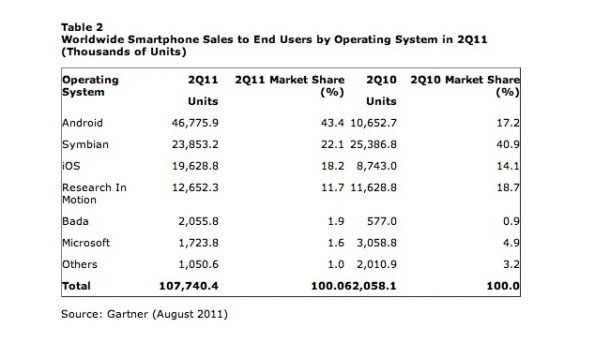 Ever since Apple started taking gaming more serious with its iPhone, iPod Touch, and iPad, Nintendo has been feeling the...