It may not be much to go on but we have finally managed to catch a glimpse of Google’s latest version of the Android operating system, Ice Cream Sandwich. Unfortunately, the screens don’t show much but at least it’s something.

Coming from AndroidPolice and RootzWiki, each site has manged to get their very own shots of the tasty flavor of Android. Both sites seems to share the same ideas concerning the latest build, though. Most changes found throughout are UI based, and aren’t too heavy. Both sites go on to say that old Android handsets should definitely be able to run Ice Cream Sandwich with little to no trouble. This is certainly a good thing if Google is truly trying to tackle fragmentation and not just further it.

The application draw has been revamped to look more like the Honeycomb app drawer, as you can see in one of the pictures. You may also noticed that the official version number of  Ice Cream Sandwich is notably absent but we still wouldn’t be surprised if it ended up being 4.0. We can expect the Nexus S and Nexus One to get first dibs on the update when it goes live, but we’ll likely see a new Nexus device debut with Ice Cream Sandwich pre-installed before we see the update get pushed to any other handset.

Here are some more details from the two sites: 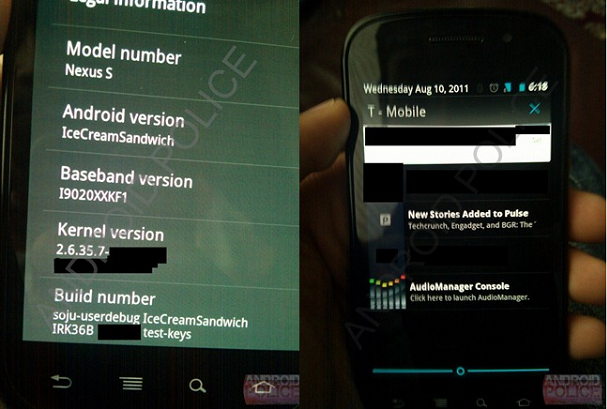 From what the pictures do show, I’m already surprised. I did think that the UI would look dramatically different but that’s not the case. That’s not a bad thing in the least bit, and will likely be beneficial to some older handsets.

Anyone have any thoughts on the pictures? It’s not much to go on, and I certainly don’t have a final opinion but we’d like to hear what you think so far.

All of a sudden, October seems so much farther away.

You didn't think that Samsung would be stopping at the Galaxy S 2 this year, did you? Apparently the Android...