I was at the Dreamforce conference today in sunny San Francisco checking out all the latest and greatest in enterprise software and I couldn’t help but notice that tablets were all over the place. Well, not tablets, just the iPad. I counted at least 30 tablets on the show floor and they were all iPads. Has the iPad already won with businesses?

Of course, an anecdotal story isn’t representative of the larger situation but this made me think of the larger tablet market as a whole and I’m reminded that Apple sold 9.25 million iPads last quarter and that’s probably more than all the other tablet makers combined. In fact, outside of tech conferences, I’ve only seen one non-iPad tablet in the wild. I saw a lady reading from a BlackBerry Playbook at a restaurant. She was a tourist from Canada.

Still, the enterprise market is a different beast entirely where Apple generally doesn’t do that well unless you’re talking about some of the creative fields. From my time at InformationWeek covering enterprise mobility, I know that the iPhone changed that – I heard plenty of stories where a C-level executive got an iPhone and forced it on the company’s network while the IT departments scrambled. I’m starting to see the iPad take on a similar role within businesses. 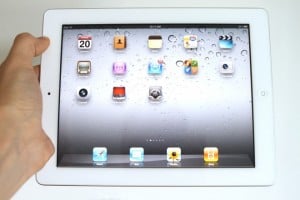 The thing about Dreamforce is that it’s a businessman (or woman’s) conference. Unlike most of the mobile tradeshows I go to, the uniform here is a full suit instead of jeans, a t shirt and a hoodie. Many of the attendees are road warriors who are likely equipped with company-issued BlackBerry smartphones and Lenovo ThinkPads (some still running XP). Yet, the iPad was still as common as an overpriced neck tie.

This isn’t to say that businesses are in a post-PC era, as the iPad became a strong complement to many workers. For example, a traveling sales person doesn’t always need to lug in a five-pound laptop to a client’s board room, as an iPad can provide the PowerPoint presentation, give that worker access to e-mail, web browsing and navigation and give the company a certain image of technological prowess.

If everything is the same, wouldn’t you tend to think the company showing you its catalog on an iPad is more “with it” than one that has a printed one? The Tampa Bay Buccaneers have already replaced their playbooks with iPads and it has opened up the door to multiple new possibilities – instead of having to carry a physical playbook and DVD for films, players have all of that in one place in an attractive package.

Quickmobile helped build the official Dreamforce app and it’s compatible with the iPhone, Android, BlackBerry and the iPad. When I asked if Honeycomb or the PlayBook were in the running, they said that Salesforce looked at its demographics and decided that the iPad was the only tablet worth supporting. Salesforce has a ton of cash, so if any other tablet had any significant share, it would have built an app for it.

Medl Mobile told me that one of the fastest-growing and most-interesting segments of the app market in the business-to-business iPad app space. These programs never see the App Store, are deployed through business distribution networks and may only be made for as few as 4 people but businesses are seeing a legitimate value in these types of programs.

For example, Kaiser Permanente built an app for some of its sales people in Washington D.C. who are trying to reach out to governmental agencies. Some of these buildings aren’t even allowed to have WiFi due to regulations, so it built an iPad app for these workers which includes videos, built-in maps and all the information they need to potentially close the deal. Medl has created multiple B2B apps for companies and so far, tablet versions have only been for the iPad.

While the iPad is definitely the runaway hit in the business tablet space, Medl founder and CEO Andrew Maltin said he expects that to change over time.

“Just as Android surpassed iOS in the phone market, I expect a lot of companies will start buying and investing in Android tablets,” said Maltin.

He said that a lot of the issues with Android fragmentation can be addressed within a single company that standardizes on a single tablet or or a small portfolio of these. Additionally, the deeper system-wide APIs in Android could be very appealing for many companies. Still, Android and others will have to overcome the coolness factor of the iPad.

“The cache of the iPad will always be there,” said Medl founder and creative director Dave Swartz.

This is the market that Research In Motion should be killing, as the PlayBook offers many similar iPad features but with enterprise-grade security out of the box. The RIM tablet hasn’t taken off with consumers yet and Medl hasn’t seen much interest from enterprises yet either.

Don’t count Microsoft out of the business tablet race either, as Windows 8 is supposed to offer full computing power while also including a tablet-friendly user interface. Microsoft has deeper connections with enterprises than Apple and its development environment is one that many companies are familiar and comfortable with. It remains to be seen how good Windows 8 on a tablet will be and we should get a sneak peek at this in a few weeks at the Build conference (yep, we’ll be there). It’s also unclear if Microsoft Windows 8 tablets will ever achieve the same amount of end-user desire and coolness factor that the iPad currently has.

Like with the overall tablet market, Apple’s iPad is king with businesses. For now.

CNET is reporting today that an Apple employee lost an iPhone prototype in a bar yet again. This time around,...