Large smartphones are something that polarize the mobile community. When the first generation Samsung Galaxy S shipped it packed a 4 inch screen. Many people were protesting at what was at the time considered a monstrosity. It didn’t take very long for someone to outdo the Galaxy S however and release a 4.3 inch smartphone; that made even more people cringe. The madness doesn’t stop there though, at the Consumer Electronics Show this year the 4.5 inch Samsung Infuse was announced for AT&T and it was, to put it lightly, ridiculous. During this week alone Samsung announced two devices with a 4.5 inch screen, the Samsung Galaxy S II LTE and the T-Mobile variant of the Samsung Galaxy S II. HTC, looking to take things up a notch, is rumored to be releasing an Android Gingerbread 2.3.4 device codenamed “Runnymede”. It’s going to have a 4.7 inch screen with a resolution of 800 x 480 pixels, 1.5 GHz single core processor, 768 MB of RAM, and an 8 megapixel camera with a 28 mm wide-angle lens and a focal ratio of f/2.2, which in layman’s terms means it should be one of the best cameras on any mobile phone. 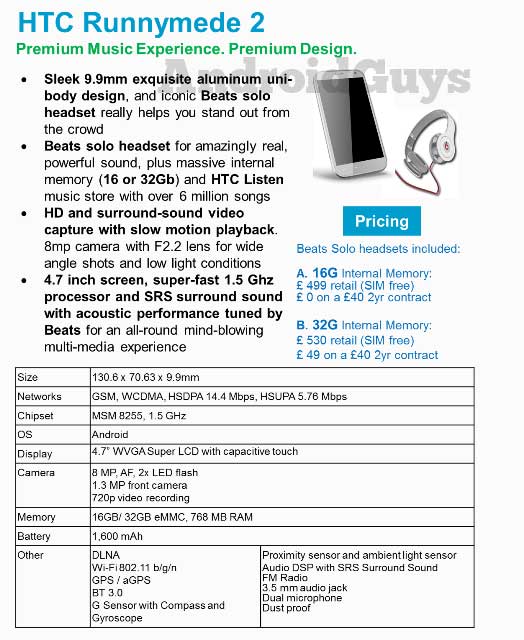 Now whether or not HTC will label this thing as a tablet or a smartphone has yet to be determined. The single core processor raises some questions as to where exactly this thing falls in HTC’s product portfolio. If they do market it as a tablet, then why aren’t they going with Android Honeycomb? If they pitch it as a smartphone, are they going to try and get clothing manufacterers to make larger pockets? We’ll find out soon enough as HTC is due to hold an event in London in less than 12 hours where they’ll be showcasing some new devices.

What do you guys thing, has HTC gone absolutely stark mad or are they merely giving consumers what they want?

If you're on a market looking for some "3D smart" action, you probably want the HTC Evo 3D. Sprint is...