South Korean handset vendor Samsung has finally unveiled the Galaxy S II variant we’ve all been waiting for: The Galaxy S II HD LTE. Just as the name implies, this smartphone is capable of using LTE networks, has a 4.65 inch Super AMOLED display with a resolution of 1280 by 720 pixels which delivers an astonishing 316 pixels per inch, and other than that … it’s basically got the same guts as the 4.5 inch Galaxy S II LTE that was announced at IFA in late August. Inside there’s a dual core 1.5 GHz processor, what we assume to be 1 GB of RAM, and an 8 megapixel camera than can also capture 1080p video. Will this thing come to American shores? Probably. It’s likely that what you’re looking at below will be the Nexus Prime, slated to be announced in October or November. It’ll run the latest version of Android, dubbed Ice Cream Sandwich, so we might see the front of the device change since it’s assumed Ice Cream Sandwich will eliminate the need for front facing buttons. 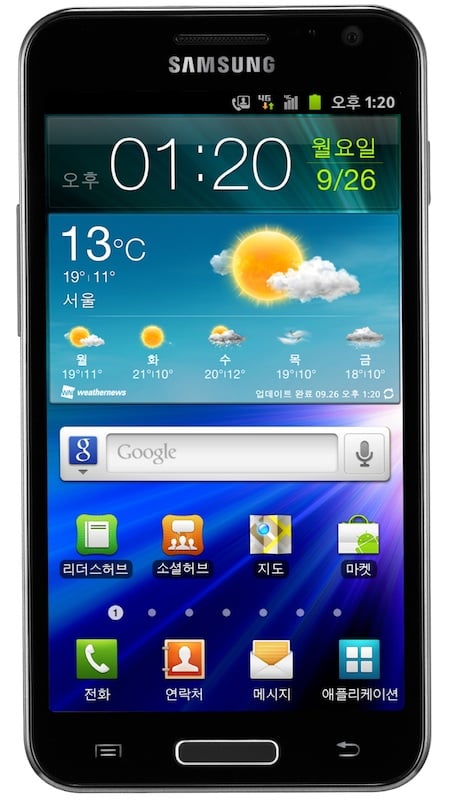 Speaking about design language, what you see above shouldn’t come as much of a surprise. Samsung hit a home run with the Galaxy S II, recently announcing that they’ve shipped over 10 million units since first launching the device back in April. Rather than trying to reinvent the wheel, Samsung is taking a cautious approach and just going with what works. To be honest, we are starting to find Samsung devices a bit boring to look at, and we hope that at Mobile World Congress next February we might catch a glimpse at a new and improved Samsung look. It’s not like their the only guilty ones, every HTC phone since made after the invention of fire looks the same.

Anyway, if this thing does come to your neck of the woods, would you buy it? Even if you don’t have LTE coverage, that screen will definitely turn some heads.

The upcoming HTC Runnymede, which we'll probably see officially announced at the Taiwanese company's October event, has been caught in...